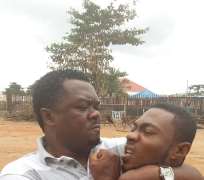 He sparks up in a New intriguing action movie along side top Acts in the Nollywood movie industry..

"Featuring in the movie is a great experience....mcvance says", Nollywood fans would be in suspense as the pictures from the movie Scenes below tells what to expect from the movie..