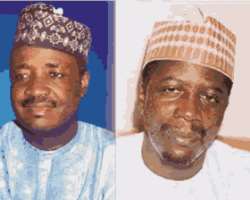 There is no permanent friend or foe in politics. But permanent interest abounds.This time-honoured truth best illustrates the relationship between Sokoto State Governor, Alhaji Aliyu Magartarda Wamakko and his predecessor, Alhaji Attahiru Bafarawa. Both men have been at each other's jugular since 2007 when the latter left office.

In the 1999 gubernatorial elections , Bafarawa and Wamakko contested the election on the platform of the All Peoples Party(APP), now All Nigeria Peoples Party (ANPP), as governor and deputy governor respectively.

They won the election. At a time when most governors, and their deputies were at daggers drawn, there was no known skirmishes between the men. This resulted in Bafarawa returning Wamakko as his running mate in 2003. However, cracks began to show between the duo towards the end of their second term in office. The climax was the resignation of Wamakko on March 15, 2006.

The former deputy governor went on to contest the 2007 governorship election on the platform of the Peoples Democratic Party(PDP). He defeated the candidate of the Democratic Peoples Party (DPP), Alhaji Maigari Dingyari where his former boss pitched his tent following his exit from the ANPP. Dingyadi was the Secretary to the Sokoto State government during the regime of Bafarawa.

Since Wammakko succeeded Bafarawa as governor on May 29, 2007, there have been no letiup on the war of attrition between them.

How they fell apart.
There were several reasons leading to the feud between Bafarawa and Wamakko, but most paramount was the ambition of Wamakko to succeed his boss. This pitched him against Bafarawa, who preferred somebody else.

Wamakko is said to have suffered several humiliations in the hands of his boss, owing to his ambition to succeed him. These ranged from having his office subvention, entitlements, vehicles withdrawn. There was also an alleged sponsored moves to impeach him from office. It did not take long for Bafarawa to start sidelining him in the running of government. For instance, whenever the former governor travelled out then, he handed over to Secretary to the State government, Dingyadi instead of his deputy.

When Bafarawa's administration upgraded the Local Government Bureau into a full-fledged ministry and removed it from under the control of his deputy, the relationship between the two former friends worsened. Wamakko read and interpreted the hand-writing on the wall. Fearing a possible orchestrated impeachment against him by the House of Assembly, he resigned his position as deputy governor.

But that did not stop the battle between Wamakko and his former boss. He contest against Bafarawa's preferred candidate in the last governorship election i where he emerged governor to the chagrin of his predecessor.

Since May 29, 2007 when Wamakko succeeded his friend-turned foe, the political tussle between both men has assumed a totally new dimension. Today, the war has shifted to the courts. while Bafarawa is fighting desperately to get the courts to sack his former deputy from office, on the ground that he was not validly nominated for the election, the latter is fighting him through the Economic and Financial Crimes Commission, EFCC, on alleged corruption while he held sway as governor between 1999 and 2007.

The EFCC battle
When Bafarawa left office on May 29, 2007, he boasted that he was leaving behind in the state coffers over 11 billion naira. But on assumption of office, Wamakko said he met an empty treasury. Government sources said Bafarawa's boast of leaving over 11 billion naira was based on anticipated and unreceived Federal allocation to the state for the month of May and the state's shares in the Cement Company of Northern Nigeria (CCNN). Bafarawa allegedly sold the shares to his brother's company, NASDALBAF for 100 million naira, when another company had offered to buy same shares for 750 million naira.

Obviously scandalized, the former governor reportedly wrote to the EFCC to investigate his administration before the records were mutilated. But nothing happened. It was gathered that it was not until Wamakko wrote EFCC that action was taken on the issue with the arrest of Bafarawa, and subsequent arraignment in court.This development created the impression that the Sokoto State government is behind the travails of the 2007 presidential candidate of the DPP.

Apparently acting on the strength of the petition allegedly masterminded by the governor, the anti-graft body picked up Bafarawa in December 2009 while he was attending a mega summit parley in Abuja, for allegedly withdrawing 349 million naira from the state's Universal Basic Education Board for personal use; selling Sokoto State shares in CCNN to his younger brother, Alhaji Nasiru Bafarawa and converting 2 billion naira from the joint state local government account for his personal use.

Though fingers are daily pointed in the direction of Wamakko as the brain behind the rough times his former boss is having with the anti-graft agency, the governor's spokesman had said the claim is untrue as it was petitions that were written to the agency that nailed him.

Before the EFCC arrested the former governor, he had appeared before a state commission of inquiry set up by the Sokoto State government to investigate his administration over alleged misappropriation of funds running into 2.919 billion naira on the Local government affairs whose portfolio Wamakko held for most of the time he was deputy governor.

Bafarawa had reportedly told the commission that Wamakko was 'my deputy whom the Assembly nearly removed for corrupt tendencies. If there were such illegal deductions and withdrawals, he would be in a better position to answer for them. Wamakko should also be invited to testify so that certain issues can be clarified.' And that was the end of that persecution by the commission of inquiry.

The unending governorship tussle
For close to three years now, Bafarawa protÃ©gÃ© and former Dingyadi has been in court seeking to vitiate Wamakko's victory in the 2007 governorship election in the state. Dingyadi was the DPP candidate in that election.

The former governor is believed to be the brain behind the governorship tussle which has gone to the state election petition tribunal and Appeal Court. The case which has generated so much tension in the state and greatly rattled the Sokoto State governor is expected to be decided soon.

The case had gone from the gubernatorial petition tribunal in Sokoto to the Appeal Court and back to the tribunal. The judgment is presently pending at the Court of Appeal, Sokoto. But for the order of the Chief Justice of Nigeria, Justice Alloycious Kastina-Alu, judgment in that case would have been given.

However, it suffices to say that the outcome of that gubernatorial dispute which is pending before both Court of Appeal and an Abuja High Court would determine the future of things in the politics of Sokoto. It is generally believed that whosoever emerges victorious in that gubernatorial tussle would have the last laugh. If the election of Wammakko is upheld, he is likely to go all out against his former boss. But if the case goes otherwise, the former DPP presidential candidate would have thought his former deputy some political lessons.He would therefore go ahead to control the politics of the state for the next four years.

Both men know the implication of either a loss or win in the ongoing tussle, hence they are deploying every arsenal at their disposal to prosecute the war. However, the brickbats between them notwithstanding, Bafarawa continues to insist that he does not have problem with Wamakko being governor.

He told a national daily recently that ' I don't have a problem with Wamakko, maybe he has with me. He and the media made it look as if I have a problem with him. Why should I? The way he is going around that I wronged him is wrong. He is my younger brother. I brought him on board in 1999 and 2003. How then can I make trouble with him? Our problem is not with Wamakko, but it was caused by ex-president Obasanjo, who brought Wamakko into their camp in order to create problem between us.'

That notwithstanding , the truth remains neither Bafarawa nor his successor would rest until one vanquishes the other.