How do they dance? 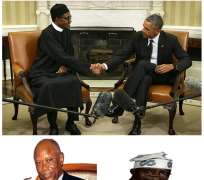 The National Leader of the ruling All Progressives Congress (APC) Asiwaju Bola Ahmed Tinubu recently pleaded with Nigerians to allow President Muhammadu Buhari use his first 100 days in office as his “honeymoon” period, to study the state of affairs in the country before executing his “change agenda”.

This is very interesting, coming from not only a political wizard who is very conversant with the silver linings of Nigerian political sky, but also the National Leader of the ruling party.

Every Nigerian knows that even before the advent of the fourth Republic, the first public assessment of an incumbent public officer has always been made on the day the officer clocks 100 days in office. That has been the routine and the normal practice all these years.

Now, assuming that Tinubu is serious with this demand, what should be happening with the governors and the local government chairmen? Should Nigerians also grant them a 100-day “before-work” casual leave, to enable them study their own grounds and plan for the future as well? And if they do, should Nigerians be expecting a rainfall of miracles which will automatically transform the country into the rosy land of their dreams by the time these public officers resume work in earnest?

For crying out loud, someone should tell the APC to put their acts together now, before it becomes late. Time is not on anyone’s side right now.

If we can think back a little, somewhere down the line during the last dispensation, it was widely suspected that Boko Haram was actually planted by some Northern politicians to make governance difficult for President Jonathan. I reminded the contending parties that if the opposition insisted on making governance difficult for the incumbent government of Dr Jonathan, and eventually the opposition takes over power, what would make them think that the government they ousted by foul means would not get back at them, and make governance difficult for them too, once they have taken over power? It was pertinent at the point in time for me to remind the APC leaderships that the trappings of power are never relinquished without a struggle. In that case the brunt of the do-me-I-do-you attitude of Nigerian politicians will be shouldered by the voting masses, and that would be no use to the democratic development of the Nigerian nation.

But just about that time, Professor Wole Soyinka alerted the nation that Boko Haram had gone international and that the government should sit up and declare a full blown war on their insurgency.

For some unclear reasons, Dr. Jonathan connived to purchase some military wares from South Africa for that purpose, but failed to follow the due process. Everything was happening so fast. Nigeria listed the support of the USA and some European countries to help it fight the insurgency. I also drew the attention of the nation at that time to the fact that if tomorrow a Northern President emerges, it would not possibly signal that the Boko Haram insurgency would be easily forestalled, just as it was difficult for a President from the Delta region to stop the insurgency of the Delta people.

It is two months now. Ministers are yet to be appointed. The President is said to be studying his “agenda”. But if we may ask: who is there to brief the President on the goings on in the various ministries, if not the ministers? Perhaps, the President thinks he would be better briefed by the permanent secretaries of the various ministries. He will need to read one of my articles, published in several media including Sahara Reporters and Tell magazine titled: “Nigeria’s Siamese Twins of Corruption”. What I am saying is that if President Buhari continues to trust that the career civil servants in government are reliable enough to keep briefing him on the day-today running of affairs in his government, he will possibly not get the right reports that can give him the leeway he wants to tackle the numerous problems he has to face, to effect the change Nigerians yearned and voted for. He should appoint ministers immediately and get briefed by them, not by the career civil servants.

This action yawns for expediency.
It is not escaping the notice of Nigerians that perhaps because of the nature of their merger, the various parties that formed the APC started having their collective headache just one month after the party was inaugurated as the succeeding government. Its biggest problem right now is how to resolve its leadership crises. On the one hand is the need for the APC, as the ruling party, to clarify in public interest its hierarchical ladder. Many Nigerians are confused. For instance, it is a well established fact that the President is the leader (flag bearer) of his party. In the case of APC, Tinubu is said to be the Leader of the party. So, what is President Buhari? Is he also “a leader” or “the leader” of the party at the same time? Or are Tinubu and Chief John Odigie-Oyegun sharing the post of National Chairman of the APC? In other words, where is the place of Alhaji Ahmed Tinubu between President Buhari and Odigie-Oyegun as leaders of the APC? It will be necessary to clarify this distinction in the interest of the Nigerian public because it is now becoming obvious that the problem that will eventually ground APC, if the leaders don’t grapple with it in time, will be the hassle for leadership.

It will be recalled that one of the major crisis now rocking the APC began with the choice of principal officers for the Senate and House of Representatives. Against the stand of the APC, Dr. Bukola Saraki and Yakubu Dogara emerged as President of the Senate and Speaker of the House, even when it is being alleged that the documents relating to their elections were falsified. The problem nosedived when the party submitted its list of other principal officers and was snubbed by the Senate President and the House Speaker. That act seemed to suggest that the two officers are brewing impunity into the system.

Be that as it may, the National Chairman of the party, Chief John Odigie-Oyegun has assured the nation that the current crises in APC is receiving due attention and would soon be resolved. He is optimistic that given time, the government will be able to deliver on its electoral promises and he assures Nigerians that the rumour being peddled that the PDP was stalling governance for its own selfish reasons was not true in any sense. That means that the opposition party has been vindicated for now from the possibility of running down the incumbent government for whatever reason.

The ball is then in the court of the APC. Before the Jews hounded Jesus to be judged by Caiaphas, they mocked and castigated him, saying: “Physician, heal thyself!” Right now, that admonition cannot be applied to the APC. Nigerians haven’t yet lost faith that the APC will cure their persistent national headache. But when the APC is sick, that is a different drumbeat. How do they dance?