PANIC WITHDRAWAL AT BANKPHB OVER CONTOVERSIES 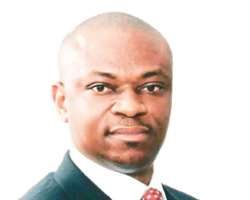 Ever since the sack of the former boss of BankPHB, Francis Atuche by the no-nonsense Central Bank Governor, Mallam Lamido Sanusi who took over the baton from his predecessor, Charles Soludo, the once-upon-a-time glorious bank, BankPHB has been swimming in one controversy to another and this has greatly affected the quality patronage they used to enjoy as customers from all walks of life are said to have started withdrawing their interest from the bank.

The major crisis that led to the present situation of the bank, according to inside source, is the shocking discovery of their former boss' Francis Atuche's sharp practises he allegedly committed with some board members and wife who is said to have properties scattered all over the place including Dubai and London. The genesis of their predicament started a couple of weeks back when a Federal High Court in Lagos repealed the acquisition of Spring Bank by BankPHB.

The bank which now has Cyril Chukwuma as the MD/CEO has been ordered by the court to stop parading itself as the owner and sister company of Sprink Bank. This new development, according to information, has been generating a lot of brouhaha amongst some top management of the bank who have, in one way or the other, involved in some shady deal during the acquisition of the bank.

In December 2001, information reveals, BankPHB opened a N21 billion bid for over 3 billion units of the issue shares of Spring Bank at N7.00 per share. It was not until recently that some certain authorities discovered that Francis Atuche, the former boss and his cohorts have failed to follow due process in their bid to acquire the bank.

“They actually took back-door policy to achieve this despite the fact that over N50 billion was involved, just N21 billion was documented and nobody knows what happens to the balance of N29 billion which was said to have been siphoned by the former MD/CEO and some top staff of the bank who are still there till today.” A reliable source informed us. But for the help of some aggrieved shareholders of Spring Bank, Chief Udensi Ifegwu and Emmanuel Okorie, who are said to have opened can of worms on discovery of the fraud, most of the customers would have still be kept in the dark on the many atrocities and fraudulent acts perpetrated by top shots in the bank.

Right now, customers have all been scampering to withdraw their money from the bank and this, we learnt, has made the bank to have stopped giving out money to customers on account that the server is down. The Federal High Court in the suit presided over by Justice Akanbi has upheld that BankPHB was unfair in the dealings that led to the acquisition of Spring Bank and so therefore should desist parading itself as the owner. We shall tell you about a scam a certain South-South staff of the bank committed sometimes ago in our subsequent postings. Keep a date!