Amb. Fashanu Opens Up About His Past, Says Oliseh Is Our Messiah 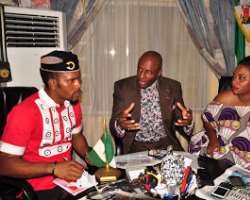 It was indeed an interesting interaction with Nigeria's famous sports Ambassador, John Fashanu as he makes some overwhelming revelations about himself and his formative years.

‎During visit to his Abuja mansion, John Fashanu took time‎ to buttress on the current issues of Nigerian football with special attention to Sunday Oliseh's appointment as Super Eagles head coach. According him, Nigerian football is sick and Oliseh is obviously the messiah we seek. He can not run away from that responsibility because over 160 million Nigerians hope depend on his capability to deliver.

Although, Fashanu played down Oliseh's‎ position about not fielding players in lower divisions. He stressed that if that had been the situation he would not have been discovered when he was a young player at a small club like Wimbleoon FC years back. When asked if he Oliseh had what it takes to deliver, he hinged his confidence on the new coach personality and youthful age as there is no basis or yardstick to rate him now. Though, he insisted that change was necessary as this is no longer the era of old boys because Nigeria is blessed with excellent coaches.

The former England player, displayed high level of simplicity as he takes AlexReports round his home as the reporter seek to know some facts‎ about him. He disclosed how he stopped playing football in 1992 when Ryan Giggs broke his legs during the match between Manchester United and Aston Villa at Old Trafford. According to Fash, it was not a deliberate tackle and Giggs showed how remorse he was.

Inside Fashanu's Mansion there are several historical photos which shows still actions and snap shots of the high and mighty around the world. He pointed out in the course of explaining some of the pictorials that late MKO Abiola gave him his first maga money as a man which he will forever live to remember. Other selected notable shots are with Kofi Anna - former Secretary General of United Nation, Prince Charles- Prince of England, General Colin Powell- Strongest man in UK, Tony Blair- Former British Prime Minister, Robert Mugabe - President Of Zimbabwe, Captain Valentine Stresser- youngest President of Sierre Leone, Jackie Chan, Steven Cigar etc. Also on the wall are photos with Obasanjo, ‎Jonathan, Gowon, MKO and many others.

‎At a closer look, Fash is a dogged fighter for fairness, dedicated social critics and an accomplished sports personality which is obvious in the plagues of awards and endorsements that are littered in his abode. As a guest to 28 presidents in the world, it will not be wrong to say that Fashanu is a dignify and noble specimen of humanity.

With Fashanu during the visit was his sister Princess Adesina Fashanu, a soft spoken hospitable individual.