Wike: His Lies And Drums Of War 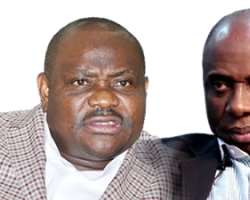 The unwarranted invectives against Dr. Dakuku Peterside, All Progressives Congress, APC governorship candidate in the April election in Rivers State by one Simeon Nwakaudu, an aide of Mr. Nyesom Wike, governor of Rivers State, is most unfortunate. Nwakaudu whose tirade, obviously was driven by his dubious desire to massage the ego of Wike raised many unanswered questions.

Though one is constrained to join issues with the said writer, the need to put in proper perspective, his diabolical allegations necessitated this response.

First, it is important to state that Dr. Peterside, a leader with proven track record, holds the view that a leader must always tell his people the truth at all times. This apparently inspired his interface with the media last weekend and early this week.

Anybody who followed Peterside’s politics; his campaigns and electioneering in Rivers State, even before the 2015 general elections knows that he ran the most disciplined campaigns. At no time did he depart from issue-based campaigns or denigrate the very values that his people hold dear. He also respected his opponents and accorded them due respect.

It is pertinent to state here that Peterside was so conscious of his people’s feelings so much so that even his campaign jingles drew their rhyme, rhythm and themes from the core moral and social values of the Rivers man and woman. His campaigns never conveyed the remotest air of arrogance or violence. In fact, he was the victim, having been attacked in Okrika, home town of Mrs Patience Jonathan during his campaign there. It is therefore fitting to say that Peterside represented the cleanest side of electioneering through the election period.

Therefore, as an important and concerned stakeholder, he cannot afford to watch while Rivers State burns, hence his recent intervention. So no one was actually surprised that Wike’s aide struggled in vain to justify the stolen mandate his principal parades. But he did grave disservice to Rivers people when he chose to misinform and mislead the people with his baseless allegations against Peterside.

But it is important to remind Nwakaudu and Peoples Democratic Party that whenever they flash their bogus claim to victory at the April 11 governorship election, they remind Rivers people of the inglorious role of Wike’s god mother, former First Lady and the anguish they imposed on them when their armed supporters laid siege on Rivers towns and communities.

Sadly, the incompetence and double-speak are already too obvious in government circles and it would amount to serious injustice on the people if Peterside, a leader had kept mute.

Even among thieves, there should be some level of honour. I think Nwakaudu, his principal Wike and people like them should be reminded again that there should be a limit to name-calling, desperation and mudslinging. Freedom of expression is an inalienable right and everybody has a right to air his or her views on issues of common concern. Rather than shadow-chasing and name-calling, Wike should defend himself with facts and figures on the weighty issues raised by Dr. Peterside.