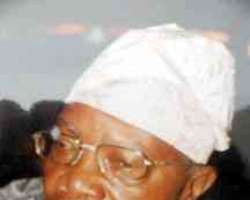 The Peoples Democratic Party in Osun State has gone ahead with preparations for 2011 primaries despite the pending determination of the petition filed by AC governorship candidate, Mr Rauf Aregbesola, at the tribunal. What's your view on this?

The activities within the Osun PDP are all motion without movement. The National Executive of the PDP has ordered that the N3 million collected from each governorship aspirant must be refunded but the party has refused to heed the order. I will tell you why the Osun PDP is embarking on this show of shame and ignorance. The party in Osun wants to create the impression that there will be election in 2011. But deep down in their hearts, they know that the AC has a strong case before the Justice Garba Ali-led tribunal. Osun PDP is replete with jesters who want to distract the attention of the public away from the political disaster that awaits them at the tribunal. Have you considered the fact that it is only in Osun where you have the cyclical motion of succession? Politicians in Oyo, Ogun, Ekiti, Ondo and Lagos are not whipping up dust in the name of political distraction and deceit.

What's your opinion on the recent crises that engulfed Jos?

I think the government must summon political courage to punish those found guilty of perpetrating the crises. Security must also be beefed up in the state just as awareness and enlightenment of the citizenry on the ills of ethno-religious wars should be carried out. Mind you, while Ekiti, Oyo and other states of the South-West showed concern about the plight of their indigenes in Jos, Osun did not evacuate her indigenes in the town. There are so many Osun graduates in the National Youth Service Corps scheme in Jos, but they were not evacuated.

Ijesaland has been a hotbed of political killings, rape and violence, following the controversial April 14, 2007 governorship election. Why is this so?

You can narrow the violence in Ijesaland into three subsets. One, we have the violence within the Osun PDP. Two, we have the violence committed by the supposed Chairman of Ilesa-West Local Government Council, Mr Ibikun Fadipe and three, the violence committed by the PDP in Ijesaland. The family of a PDP chieftain in Ijesaland, the Pa Agboola Obadare family, has repeatedly accused Ibikun Fadipe of killing their breadwinner and also the family of DHL boss, Chief Ade Komolafe, has also accused Fadipe of being the cause of the death of Komolafe, whom he attacked in Ilesa. Komolafe was flown abroad for treatment after the attack and he died in London. The PDP has been unleashing orchestrated violence on Ijesa people because of the unflinching support the Ijesa people gave to Aregbesola during and after the April 14, 2007 governorship election. Aregbesola is the epitome of a people's struggle for liberation against tyranny, waste, mismanagement, oppression and chicanery. This is why people troop out any time Aregbesola visits Osun. That is why students, traders, commercial motorcyclists, motorists, civil servants, the young and the old, the rich and the poor troop out to welcome Aregbesola. And this has been a pain in the neck of Osun PDP.

That is a big lie concocted by warped minds. Anyone who knows Osun between 1999 and 2003 will agree that the last seven years in Osun have been years of massive ruin. Can any sane person compare the golden era of Chief Bisi Akande's four years in the saddle as governor with the prevailing abhorrent lack of vision, inertia and cancerous mismanagement of resources that have characterised the Oyinlola administration? Which state road constructed by Oyinlola is good in Osun? Patients now die like chickens stricken with flu in our hospitals. Osun government budgets billions of naira for education yearly, yet no child of those in power attend public schools in the state. The construction of the Akoda-Gbongan dual carriage way was scheduled to be completed in 18 months. Six years after, the road is still under construction. Oyinlola government receives about 10 times what Chief Akande received as monthly allocation from the federal purse and yet there's no modicum of development. The Free Trade Zone project, airport construction and drug firm construction have turned out to be a continuation of the grand failure of the Oyinlola administration.