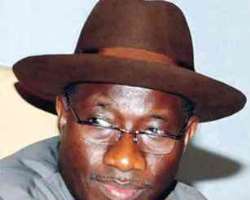 Acting President, Dr. Goodluck Jonathan
The performance of the new ministers is tied to their ability to implement the 2010 budget successfully, but OLUWOLE JOSIAH writes that the urge for dubious sharing of unspent votes among top officials of ministries, departments and agencies could yet constitute a pain in their necks.

The challenge before the new ministers is the implementation of the N4.6 trillion budget passed by the National Assembly on March 25 in a way that it will impact positively on the lives of Nigerians during the remaining 14 months of this administration.

Acting President Goodluck Jonathan's decision to dissolve the Executive Council of the Federation for the purpose of getting fresh and better hands to rejuvenate governance in the country was expected, although it did not happen without the hues and cries from those who saw it differently. It drew flaks from the cabal protecting the seat of ailing President Umaru Yar'Adua because they believed that Jonathan was out to appoint his own loyalists who would be willing to activate Section 144 of the 1999 Constitution and eventually remove Yar'Adua from office on the grounds of permanent incapacitation.

But majority of Nigerians, including Senators, praised the decision, saying that the cabinet was already factionalised along the lines of pro and anti-Yar'Adua sentiments. They further argued that the Acting President could not function effectively with a divided cabinet.

However, the politics of appointment of ministers was not devoid of intrigues and stratagem employed to advance certain interests as the names were compiled. The returnees were the most apprehensive, and they worked very hard to ensure that their nominations were confirmed by the Senate. The list of ministerial nominees further created a frenzy of frustration and confusion as those whose names were expected failed to make the first batch sent to the Senate.

For example, the non-inclusion of the name of the former Minister of Information and Communications, Prof. Dora Akunyili, in the first list heightened the anxiety. But when more names were sent to the Senate containing a mixture of old and fresh nominees, calm returned.

Then the petitioners went to work, writing to the Senate with a view to having some of the nominees disqualified for reasons of ethnicity or federal character principles. But it appeared from the setting that the Senate was rather in a hurry to get the ministers ready for inauguration for Jonathan to start work, than to create squabbles that would delay the process.

Thus, the screening began on March 29 and continued smoothly until the former Minister of National Planning, Dr. Shamsudeen Usman, did not appear when he was supposed to be screened. Although there was no official confirmation concerning why his screening was delayed until the last day, feelers were that there was a last-minute decision to drop him from the cabinet, but for a last ditch effort from powerful quarters.

While they were being screened on the floor of the Senate, the issue of the failure of the budget to impact on the lives of ordinary Nigerians recurred. The blame was placed on ministers and bureaucrats who failed to discharge their duties effectively, leading to poor implementation of the federal annual budgets since the return to civil rule in 1999.

The National Assembly is vested with the power of appropriation as enshrined in Section 80 of the 1999 Constitution. But after the budget is prepared, the ministers and their ministries, departments and agencies proceed with the implementation.

Before now, budgets were implemented at the whims of the MDAs which rolled budgetary items to the next year each time they could not complete their execution, even when such items would also be reflected in the new budget.

But the new policy of returning unspent funds revealed the underbelly of the dubious implementation of the budget over the years. Here, ministries' top officials engaged in sharing whatever was left of their votes at the end of every year in the name of continuing with the projects, while also providing for similar projects in the budget.

Yar'Adua's insistence on returning unspent funds for projects not completed before the end of November of a fiscal year had cost former Minister of Health, Prof. Adenike Grange, and ex-Minister of State, Gabriel Aduku, their positions as they were alleged to have sat over about N300m supposed to be returned to the national treasury as unspent funds.

Recently, the executive found a good excuse for the failure of the 2009 budget in the lack of capacity on the part of the MDAs to cope with its execution. Erstwhile finance minister and immediate past planning minister, Usman, told the Senate during his confirmation hearing that low capacity of the MDAs resulted in the failure of proper implementation of the budget.

He said, 'Achieving better budget implementation, I think, requires a lot of capacity building on the side of the executive. Capacity is very, very weak and we must address that and a few issues on integrity and so on.

'Weak capacity' is an euphemism for a dearth of competent personnel. Round pegs are in square holes across the ministries which are made up largely of people hired on the basis of federal character, ethnic leaning or connections in the corridors of power. Appointing people into government agencies on the basis of merit has become very difficult, resulting in a largely inept civil service.

According to Usman, efforts to tap into the various revenue sources and plug the holes while preparing the 2009 budget still met with some failures. As he put it, 'Unfortunately, there was a lot of leakage. But in fairness to both committees of the Senate and the House of Representatives, a lot of work has been done in this area.'

Another returnee minister, Mr. Remi Babalola, was forthcoming in challenging his colleagues to work hard in ensuring that the 2010 Appropriation Bill, when signed into law, is properly and fully implemented. His comments also arose from questions on the trend of budget failures which has reached a height since the commencement of the Yar'Adua administration.

Although he appeared to be a lone voice, the former Minister of State, Finance, said he had recommended in his memos and proposals that ministers should be held responsible for failure in budget implementation.

He said, 'In terms of budget implementation and performance, I have written at various times and it is also on my website, the fundamental difference…the only thing that can ensure enhanced performance and implementation is to hold ministers responsible and accountable. There is no doubt in mind about that.'

His panacea for the problem was that ministers should have their goals clearly set out and their objectives well defined in the budget statements so that implementation could be speedy and result oriented.

'If we set out the objectives and at the end of the day we are returning money to the treasury, it will not help you when you go back for re-election. What Nigerians want is to make sure that there is prosperity and that is what we need to do in the Ministry of Finance.

'Because I have been in the public space and have a solid background from the private sector, I believe that we have a very short time now for delivery and we actually have to be on the go. We have every reason to go straight to work and be on the hedge and get results. We have no time for excuses, for non-performance again,' he said.

The performance of the newly appointed ministers is tied to their ability to interpret the 2010 budget and promptly get the funds into where they are needed for immediate results. Results will also be judged by the impact of such investments and projects execution, particularly their immediate impact on the lives of Nigerians.

The government will be spending an estimated N4.6tr on various projects in the country. As the year preceding the 2011 general election, many people expect the ministers to be in a hurry to justify their inclusion in the new federal cabinet by judiciously managing the funds to produce results. Much of the budget would be going into infrastructure development, especially power. If at the end of the year, the funds go down the drain and Nigerians still live without stable electricity, then a terrible failure would have been recorded.

Envisaging this, the President of the Senate, David Mark, called on Jonathan to sack any minister who failed to perform. He said, 'I will like to use this opportunity to ask Mr. Acting President, Commander-in- Chief that any minister who does not live (up) to expectation should not be spared.

'He should immediately be removed from office so that he/she does not become a cog in the wheel of progress.'