I WANTED TO BE A TEACHER, BUT FATE DECIDED OTHERWISE â€“GLORIA BAMILOYE, ACTRESS 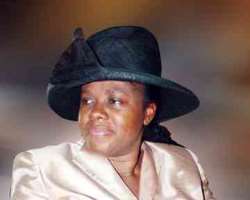 An encounter with Mrs. Gloria Bamiloye reveals a simple and hardworking woman. Beginning her career on a humble note in 1985, when people lobbied to use churches as platforms to stage plays, she has carved a niche for herself as a dramatist and actress.

In fact, ardent followers of her works and stakeholders in Nollywood reckon with her and her husband in the growth of that section of the industry.

Reliving the journey so far in an interview with Saturday Punch, she expressed her satisfaction with a number of positive changes, especially the fact that more organisations with the same goals have since been established and are doing very well.

'I remember those days when we had to go to church organisations and beg them for an opportunity to reach out to their members and some would reluctantly allow us. But the good thing was that they were never disappointed after our plays. It took a strong persuasion for us to hold on to the vision of core Christian movie industry at a time that it was still very alien to our target audience. But today, our works are appreciated across all sections of the society, and it is always our joy to be part of what other drama ministries are doing,' she said.

Soft spoken Gloria was born into a Muslim family, but she was later converted to Christianity and got married to Evangelist Mike Bamiloye, the President of Mount Zion Ministries International, a foremost Christian movie production outfit, over two decades ago.

She told our correspondent that her marriage to the man, who she described as very romantic, did change her life. Apart from interpreting roles on set, she also serves as the Vice-President in that organisation.

Although Gloria had always featured in Christian plays as a student, she actually planned to settle for a teaching career.

According to her, she discovered, as time went on, that she was actually meant to make her marks in life by acting in Christian movies, a venture which has not only paid the bills in her home but opened the doors of stardom to her across the globe.

She said, 'I loved drama but I never planned to be a drama minister. I had always wanted to be a teacher and subsequently a pastor but I later discovered that my purpose in life was tied to drama.'

Mike and Gloria's love story, as narrated by her, is similar to that of most love birds. Their paths had crossed while she was studying at the College of Education in Ilesha, Oyo State.

Unknown to her, destiny was beckoning when one day she decided to join a Christian drama group where she, in company with other new members, was introduced to the coordinator of the group. A few years later, he became her husband.

Describing how they met each other, she said, 'It all began in the drama group in school. He used to come to school after he passed out to give us play-lets. I was invited to the drama unit that day and new members were introduced to him. I never knew that I was being introduced to my husband. Back then, we had played some roles together. There was a time I acted in a television drama as his girlfriend. One thing had led to another and later, he came to me and said, 'Will you marry me?''

Asked how she managed to combine romance with work, since she usually played intimate roles with her husband in most movies, she said, 'My husband is romantic. He is a man of God but he usually demarcates his work hours from the time he spends with his family. That is why when you get to our home there is joy and laughter. But I don't carry the mentality of being his wife to locations because it is a world of difference. When we are at locations, my husband is my director and I have to obey his instructions strictly. But when we get back home, the romance continues.

'I don't see him as my husband on set because we are at work. Do you know that there was a scene that my husband had to slap me in one of the movies and he slapped me because that was how it was written in the script? You have to sacrifice something to make it real.'

Born into a polygamous family, Gloria, who lost her father at a very tender age, measures success in life by the impact she makes on fellow human beings. That, she disclosed, was one of the lessons her mother taught her.

'My mother is a very hardworking woman and one that loves her children dearly. So much that she refused to remarry after my father's untimely death. She chose to struggle to bring us up, so I grew up seeing a very strong woman. She is still alive today and she lives with me. From her I have learnt to influence people positively as much as I can,' she said.

For Gloria, combining the task of being a mother, wife and career woman is demanding but surmountable. 'You know, I have been in this work before I got married. I got married to a drama minister like myself in it. I had my children in it. So, it is as if the home is entrenched in the ministry. That makes it easier for me to cope. My children are also taking after our work already. My view is that the home must never be left to suffer for the work we do. That is the first assignment for women. We must play the role with passion.'

Regarding the most challenging role that she has ever handled, she believes that all roles are equally challenging because the onus is on an actress or actor to correctly mirror reality. As an actress of about 30 years, Gloria says there is no role she cannot successfully interpret in order to pass the intended message across to viewers.

Citing a particular instance, she said, 'There was a time I acted the role of a music minister and organisations started writing to invite me to do songs at their events. They did not know that I was not into music. But that is what happens when a role is well interpreted.'

She was, however, quick to add that the determination to be real in interpreting her roles has earned her a fair share of 'harassments' from the viewing public. She recounts that some members of the public even registered their displeasure with her dressing, wearing of jewelleries and makeup in some movies.

'I wonder why people are criticising me, because in our work, you cannot do without these sacrifices. Some people would even call me on the telephone to register their displeasure. But I don't need to listen to them because we have a focus and we know where we are going. The element of believability is crucial in this work. Can you image watching a movie where I am acting as a roadside prostitute and I am dressed with my scarf on, without earrings and wearing a piece of suits? Would you believe it? And these are films that are watched across the globe.

'Right from the days when I practised Islam, I was not used to jewelleries. When I changed to Christianity, I did not bother to ask why some people don't use them. For me, it is not a sin for people to wear them. In movies, I put on whatever I have to put on when the need arises. You know, some people forget that they are watching movies. There was a day a man came to my office and expressed surprise because he could not place the two. Please, help me tell them that they should not criticise us because that is our own ministry,' she said, laughing.