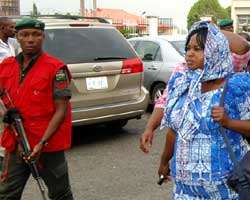 Councel for two of the accused personston the N8bn Central Bank of Nigeria mutilated currency fraud suit, Olalekan Ojo, on Friday asked Justice Olayinka Faaji of the Federal High Court, Ibadan Division, Oyo State, to step down from the case, alleging that the judge had displayed a high level of bias against his clients in his earlier ruling on bail applications.

At the resumed hearing on Friday, Ojo said that with the reasons proffered by the judge on June 19, 2015 while denying the bail applications filed on behalf of his clients, the judge had already presumed the suspects guilty.

He therefore called on Justice Faaji to disqualify himself from the case which was instituted by the Economic and Financial Crimes Commission for another judge to take over.

A witness invited by the EFCC to testify against the staff of CBN and other banks involved in the case was not allowed to stand in the witness box because of the new development.

On June 19, Justice Faaji granted the bail applications of five accused persons and denied bail to 10 others. Mr. Kolawole Babalola, Muniru Adeola, Toogun Phillip, Ajuwon Bolade and Samuel Ogbeide, who were docked on Friday, were among the suspects whose prayers were ignored by Justice Faaji.

Ojo, the counsel for Adeola and Phillip on Friday, told the court that proceedings must not continue because he had filed a motion to appeal the bail application ruling.

Ojo said, 'In the alternative to relief one supra, an order that the honourable court presided over by Honourable Justice Faaji should disqualify itself from hearing the charges preferred against the second and third defendants in charge FHC/IB/34c/2015, pending before the Honourable Court on the ground that the constitutional rights of the second and third defendants to fair trial will be or is likely to be prejudiced and or impaired by reason of likelihood or real likelihood of bias on the part of the presiding Judge.'

'Consciously or unconsciously, you have pronounced them guilty,' Ojo told the court.

Responding to the allegation and new prayers of Ojo and his clients, Justice Faaji said it was necessary to address the issue of bias on his part before the case could continue, while also announcing that the case would adjourn until Wednesday July 1, 2015.