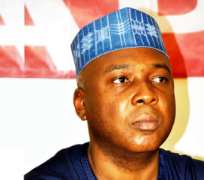 Senate President Bukola Saraki has started reaching out to the All Peoples Congress leadership and colleagues opposed to his emergence as the head of the National Assembly.

A senator loyal to him, Rafiu Ibrahim, made this known in Abuja on Sunday just as The PUNCHlearnt that the APC leadership decided to soft-pedal on its initial opposition to the outcomes of the National Assembly leadership elections in order to stave off   rebellion by its lawmakers.

Ibrahim said, 'We are currently meeting with our colleagues in the Senate. Apart from the fact that the Senate President has been meeting with those who are aggrieved , we, members of the Like Minds Senators are also engaging them on one-on-one basis.

'We are also meeting with our party leadership and I think the peace moves are achieving good result. It is in the interest of everybody that we have a united Senate.'

Some members of the Senate Unity Forum who are loyalists of Senator Lawan, also confirmed that Saraki and some of his supporters were making overtures to them.

The senators, who spoke with our correspondent on condition of anonymity because their leaders had barred them from granting interviews on the issue were, however, silent on whether the Saraki group offered them anything in return for their support.

A ranking senator from one of the South-West states said Saraki personally discussed with him on the matter.

He said, 'It is true that the Like Minds Senators have been talking with us to support the leadership of Saraki but we told them that we are not having any personal issues with the Senate president and his deputy, Ekweremadu.

'We are upholding the sanctity of our political party and its leadership. We have told them our conditions for mutual relationship and cooperation. It is left for them to take appropriate actions.'

Another senator from the South-West also explained   that the SUF members would meet this week to review the reply of their party's leadership to their conditions.

The group had through its spokesperson, Senator Kabiru Marafa, said it was demanding the immediate resignation of Ekweremadu and the   investigation of the Clerk of the National Assembly, Salisu Maikasuwa, for his role in the June 9 Senate inauguration.

Our correspondents however gathered in Abuja on Sunday that the APC leaders opted to sheathe their sword after the Presidency reportedly intervened in the matter.

The APC had in a statement   by its National Publicity Secretary, Lai Mohammed, on Tuesday described the victory of Saraki   and Yakubu Dogara       as 'unacceptable.'

Describing   Saraki and Dogara's decisions to defy its directive and vie for the posts as an act of 'monumental indiscipline and betrayal,' the party vowed to sanction them in accordance with the provisions of its constitution.

However, after a series of consultations, the National Chairman of the party,   John Odigie-Oyegun,   on Friday announced that they were ready to work with Saraki and Dogara.

A prominent member of the APC,who pleaded for anonymity, explained to one of our correspondents that what Odigie-Oyegun said represented the position of the party's National Working Committee.

He added that the APC was aware that if it kept to its hard line on the matter, the National Assembly members who backed Saraki and Dogara might rebel against it (APC).

The party member said, 'We have to live with the   reality that Saraki and Dogara are the new leaders of the National Assembly. We don't want a rebellion from our Senators and House members.

'However, those who defied us and did what they did will face a panel which will give them fair hearing before a disciplinary action.'

Asked what the disciplinary action would be, he replied, 'Even a warning is a form of sanction.

'We have no intention to open ourselves up to what the Peoples Democratic Party did to itself in the case of (Aminu)Tambuwal .

'When he (Tambuwal) emerged against their (PDP) will, instead of finding a way to manage it, they alienated him until he left them with a lot of his colleagues to join us (APC). We will not allow this to happen to us.'

The party source also revealed that as part of efforts to further douse tension, Saraki and Dogara would be prevailed upon not to sideline their defeated colleagues.

Towards this end, they are expected to concede the chairmanship of some of choice committees in both the Senate and the House to members of the other camp.

When asked   if indeed Saraki had waved the Olive branch before the party's   leadership and if indeed it     had accepted to work with Saraki and Dogara, the APC spokesman,     referred him to Odigie-Oyegun.

But calls to the mobile telephone number of Odigie-Oyegun were neither picked nor returned.

However, The PUNCH learnt that the leadership of the APC had   taken a position that the remaining seats in the House of Representatives like the Majority Leader, Chief Whip, Deputy Leader and Deputy Whip, were party seats.

Another top APC member said, 'The party has come into these positions because they are party seats and the party reserves the power to share it to the zones.

'What we hear is that, to calm nerves, Femi Gbajabiamila(the defeated APC choice candidate for the House speakership)   will be the majority leader, while a member from Kano State, Mr. Alhassan Ado-Doguwa, will be his deputy.

'Monguno will likely be the chief whip while   Pally Iriase from Edo State, will deputise for him.'

But a former House spokesman and influential member of the 8th Assembly,   Zakari Mohammed, said that replacing an elected presiding officer with another person was not possible.

Mohammed noted that it was likely that people were making speculations in view of the outcomes of the elections.

But he parried a question on what role the House or the party would assign to Gbajabiamila.

'I don't know, I can't comment on that one,' he said.Punch