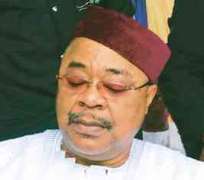 Oyo State Governor, Chief Adebayo Alao-Akala
Hard times await the ubiquitous beggars, mentally-challenged and the destitute roaming free on the streets of Ibadan, Oyo State capital, as the state government has begun to evacuate them to a camp.

At Iwo Road alone on Monday, 60 of such people were arrested and taken off the streets by the officials of the state Environmental Task Force of the Ministry of Environment and Water Resources.

The Commissioner in charge of the ministry, Alhaji Mukaila Aborode, said that non-indigenes among the beggars would be repatriated to their home states to give Oyo a breather.

Our correspondent further gathered that the state government had inaugurated disability economic empowerment programmes as part of the measures to encourage the beggars to quit the streets.

Apart from Iwo Road, these beggars and social miscreants are mostly found at Gate, Mokola Roundabout/Sabo and Beere.

Last year, the ministry had relocated a large number of beggars that usually lined Sabo Road to Jemibewon Road, a hidden location in Mokola area of Ibadan.

Our correspondent learnt that the task force might have its hands full if it was desirous of ridding the streets of all categories of beggars and the mentally-challenged.

They include itinerant Nigerien and their children, female traditionalists always decked in white apparel, the physically-challenged, able-bodied men and women and the mentally-challenged.

There are also the corporate beggars, always well dressed and usually regaled their prospective patrons with tales of how they needed transport fare to attend imaginary interviews.

Well-dressed old people, mostly women, have also formed a beggars' colony and they are always seen at bus stops operating side-by-side with women, who move about with twins to beg.

Some of the beggars hide under poor medical conditions and were always moving about with supposed medical reports to convince the people that they were in a dire need for help.

At Beere/Mapo area of Ibadan, which is notorious for harbouring criminals, there is another group of young male mendicants, who target private car owners for alms when the traffic is thick.

To evoke sympathy and arrest the attention of the people, the indigenous beggars would shower prayers on their targets, while non-indigenes hang plank boards on their neck announcing their purported conditions.

Some beggars operate in the day while some, especially women, operate at night.

Before the clampdown, Iwo Road, which is regarded as the gateway to other regions of the country, had been under the siege of beggars and the destitute.

The loafers occupied every available space at the interchange, while the unkempt large gardens provided a haven for them.

Vowing that the government would no longer treat beggars with kid gloves, the commissioner said that the task of keeping the environment clean had just begun.

Aborode said, 'The issue of the environment cannot be politicised. We are going the whole hog. We have started with Iwo Road, where we arrested 60 of them.

'Non-indigenes will be taken to their respective states of origin soon. At least, Lagos State did that and we are going to do the same thing to keep our environment clean.'