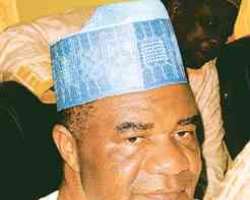 Ogbulafor, who spoke to journalists after meeting with Acting President Goodluck Jonathan at the Presidential Villa, Abuja, was reacting to recent visits by Muslim and Christian clerics to Yar'Adua.

Asked why the PDP, being the President's political party, had not been able to meet with him, even though clerics have had that opportunity, Ogbulafor said the party leadership was waiting to be invited.

'Whenever we are invited; we are on standby,' he said.

Our correspondent learnt that the PDP leadership was unable to meet with Yar'Adua on Tuesday night, as a scheduled appointment was cancelled at the last minute.

The clerics reportedly prayed for the President.
The visit of the Muslim clerics preceded that of their Christian counterparts, who also reportedly visited Yar'Adua at his private residence at the Presidential Villa last Monday.

While the Muslim clerics said they sought the invitation to meet with Yar'Adua and pray for him, the Christian leader said they were invited individually.

Interestingly, the four Christian clerics returned to the Presidential Villa on Wednesday to meet with the Acting President.

It was gathered that they briefed Jonathan on their earlier meeting with Yar'Adua.

Also on Thursday, Ogbulafor advised former vice-president, Atiku Abubakar, to follow due process in his highly publicised plan to return to the PDP.

Reacting to the reprots that the former presidential candidate of the Action Congress was planning to return to the party, Ogbulafor said the PDP was large enough to contain every politician.

But he said Abubakar should inform the PDP National Secretariat in Abuja and then rejoin the party at the ward level, rather than declaring his return on the national stage.

'If Atiku is returning, he will inform the national secretariat. Joining the party is at the local government or ward levels. It is not done at the national level. We don't have a national membership card.'

Ogbulafor explained that he was at the Presidential Villa to brief the Acting President on some undisclosed issues.

He also denied reports that the party postponed its National Executive Council meeting because of Yar'Adua.

He said the postponement was as a result of the death of some party chieftains, including former governor of old Kano State, Alhaji Abubakar Rimi, and two serving senators from Gombe State, Tawa Wada and Kawu Dukku.

Imoke wore a bandage on his hand due to injuries sustained in a recent car crash. Sylva, in a short encounter with journalists after the meeting, denied reports of a feud between him and the Acting President.

He also said the recent arrest of some officials of his administration was politically motivated, although he exonerated the Federal Government of complicity in the matter.