In celebration of World Health Day, Be selfish, Help 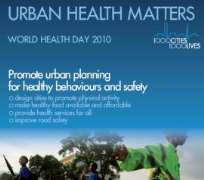 Marking the 60th anniversary of the World Health Organization's, “World Health Day” is a growing awareness of the changing nature of our understandings of poverty and health within our immediate urban environments.

Gone are the days when poverty alleviation initiatives were limited to the isolated rural spaces in our countries. Today, the poorest and most disenfranchised of us are not solely found ploughing tired soil, or desperately reaching for maize staples at the back of Red Cross relief trucks in barren drought-decimated wastelands.

This year's “World Health Day” campaign theme, “1000 cities, 1000 lives” focuses not on our archetypal understandings of mass rural poverty, which tends to illicit sympathy and temporary emergency relief efforts, but instead the more invisible infiltration of an extensive poverty in our most developed and well resourced areas. It has only just occurred to me, that having lived in South African cities for most of my life and before my involvement with the YMCA, my understanding of extreme poverty had only ever been limited to starving children in rural Africa and the occasional homeless who litter our urban centres. I say litter, because it is a word I had been taught by others, and an attitude that dominates the majority of perceptions today.

It is almost as the average city dwellers have come to despise the poor in their spaces and relegated them to a space of aesthetic pollution. Ask yourself, how often have you heard someone say in disgust “it's a beautiful city but you can't move anywhere without tripping over a begger” or watched them pretend not to hear a plea for change or food? How often have you seen people become irritated and angered by their presence? Perhaps, it is easier to feel sympathy for a poverty confined to dramatic images of fly swathed children when you have the option to turn the TV off. It is not easy to confront our own impulse of responsibility, when we are aware of poverty and hardship living beside us. Within the work done by the Africa YMCA members is a crucial understanding that poverty reduction is the responsibility of all and this influences work done by national YMCA movements throughout the continent. But, this can only go so far as the YMCA's do not operate in isolation within an ideal society. Most people still feel that poverty alleviation is the sole responsibility of government to address and that activist organisations like the YMCA are charged with monitoring government service delivery.

We all know poverty exists in our cities, and with poverty comes an entourage of health issues: pollution related illness through a contamination of our food, water and air supply; more easily transmitted STI's because of increased opportunities for obligation free sexual practices and multiple partners; and malnutrition through cheap and quick lifestyle eating which relies heavily on junk food and sugar. But for the wealthy, the problems of the city's poor are a blight, and the poor themselves are to blame for their laziness. “If they bothered to work”, we have heard some say, “then they wouldn't have to beg”.

Dr Margaret Chan, Director-General of the World Health Organization, avoids the unhelpful blame game we play with the urban poor and instead looks to infrastructure for solution. For her, “urban growth has outpaced the ability of governments to build essential infrastructures and enact and enforce the legislation needed to make life in cities safe, rewarding, and healthy”. Based on her organisation's research, globally, there are now more people living in urban areas than rural areas and the greatest “explosive growth” is taking place in Asia and Africa. Of chief concern for the YMCA is the extent to which this growth explosion and the resulting poverty is being shouldered by the urban youth which make the youth singularly vulnerable to health risks. Much of the YMCA's poverty alleviation work takes place in urban slums, from Ankazomanga in Madagascar, Kibera in Kenya, to Kroo Bay in Sierra Leone.

In Madagascar, for example, just 1.2% of the country's GDP is committed to health expenditure. As health and education facilities in urban slums are limited, the youth are particularly vulnerable to pollution-borne diseases and of contracting HIV/AIDS and STIs.

According to Gil Harper, Executive Secretary for the Africa Alliance of YMCAs, “Unemployed parents cannot afford to feed and send their children to school, and, in fact, in some instances rely on their children for income, which is derived from jobs such as carrying water.” As a recent study conducted in the region by YMCA social workers found, 60% of families survive on less than USD20 per month for a family of six, and 72% lack basic hygiene and sanitation.

In effect then, we are migrating our poor to the urban areas, and with that, increasing the risks posed to our nation's health by packing a dense population into an area lacking the resources to support it or the opportunities they need to overcome it. In addition, this environment then makes the youth responsible for not only their survival but the entire well-being of their families.

YMCA's in the urban slums have tried to alleviate the burden on the youth through specific education, health and income generation projects. As Harper explains, “Our community work in Ankazomanga revolves around health care support, education, vocational training, HIV/AIDS peer education, and community education on children's rights. Dealing with poverty impact on youth in the urban setting requires a holistic and multi-pronged approach to ensure both the wellbeing of the youth and the elevation of their opportunities for improvement in livelihoods and wealth creation.”

Although social development organisations attempt to address poverty alleviation, holistic solutions can not be created without the necessary basic infrastructure.

And we are not talking infrastructure relating only to roads, hospitals and schools... according to Dr Chan, governments in developing countries either fail to plan or lack the resources needed to provide even the most basic of infrastructure. As she explains, “most cities in low- and middle-income countries do not [even] have sewers”.

She states that “today, around one third of urban dwellers, amounting to nearly one billion people, live in urban slums, informal settings, or pavement tents. More than 90% of slums are located in cities of the developing world. In many of these cities, slums have become the dominant type of human settlement.” More disturbing still, by 2050, approximately 7 out of 10 people globally will be living in a city and there is little indication that government planning will be able to provide for the most basic of needs for the majority of its citizens.

In many ways, the “1000 cities, 1000 lives” campaign draws a future on the idea that our cities will be filled with an overwhelmingly poor population the government cannot provide for, but, this future is now, and has been the reality for both youth generation. The shock is not in that it has happened, is happening and will happen but instead, I am taken aback by how easily many people outside the development sector are able to dismiss this reality and how easily our urban centres are divided through blame and disgust by the lucky few with options for the many with very little.

During this week, we must not look at the activities being held worldwide to highlight the importance of urban health and infrastructure development as the responsibility and concern of someone else. When our community is sick, when communicable diseases come tapping at our door, infect our food and lie in our bed... know that by doing nothing, by dismissing with scorn (again, not many of us do that), we have failed to protect ourselves. Demand action by your government, become a voice that agitates for basic services to those who need them and provide healthy safe environments in spaces. Do not ignore the needs of others because you are secure in your safety... it is a false sense of security and is based on self-denial.

Part of the reason urban health has become such a great concern is not because governments fail to act, but rather because the communal unsympathetic attitude we create has ensured self-serving priorities which will ultimately see our safety and health compromised.

For further information on the “1000 Cities, 1000 lives” Campaign visit http://1000cities.who.int/ . To become more involved in urban poverty alleviation and health improvement programs contact the YMCA in your area or visit www.africaymca.org

Rider: This article is part of the Africa Alliance of YMCA's news dispatch. For more please visit: www.africaymca.org