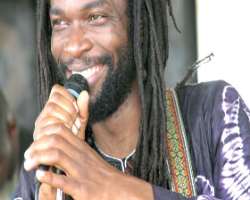 Veterinary doctor-turned-musician, Segun Akinlolu, better known as Beautiful Nubia, is one of Nigeria's leading lights in music. He has performed all over the world and was twice nominated for the prestigious KORA Award at a time Nigerian musicians found it hard to get recognition. And now, in an age when the bulk of Nigerian music artistes are compromising standards by miming to CDs and recording their songs digitally, Beautiful Nubia has continued to use live instruments in his performances and recordings. OSEYIZA OOGBODO met him recently.

Your stage name is Beautiful Nubia. How did you come about it?
Nubia was a kingdom of Africans who were the leaders of the world for about 3000 years ago. I use this name to remind my audience that people like us were once the innovators and global leaders in thought, philosophy, economics and science, and that perhaps, if we could learn to love ourselves and work together, we can get to that position of eminence/prominence again.

Considering your name, have people ever said you are not beautiful, for any reason whatsoever?
Ha, ha, ha ... Only once have I heard something like that - a show at a university some years ago ... I was being taken around to all the hostels so students could believe that I was actually there physically for the show. We got to one of the female hostels and just as the Students Union official was finishing the announcement, I overheard a young lady say to someone beside her, “Oh there he is ... he's not even that good-looking.” I said something funny in reply and she realised I had heard her, she totally freaked out. That was so funny.

Why did you title your latest album, Irinajo?
Irinajo is the title of one of the 12 tracks on the album.

Which producers worked on it and where was it recorded ...
I produce all my albums with members of my band. We recorded it at TAJ Studios, a relatively new studio in Lagos. We had fun recording as usual, you know we've been doing this for so long it has become second nature. The whole band did the initial lay-down, then individual musicians did some overdubs after which we did the mix. The mastering was done in Canada.

Which is the hit track on it?
My albums are not designed to yield hit songs. Each song tells a story that is just a part of the whole. I'd rather have songs with a timeless appeal, albums that would still be in demand many years from now. Can you imagine that Jangbalajugbu which was released 8 years ago is still in high demand? That's the kind of thing I am interested in.

How is Irinajo doing in the market presently?
It's too early to say much on this. The album was only released recently, but going by past experiences with our other albums, it will sell its own quota and will continue to sell from year to year. We have a dedicated audience that buys our albums even sometimes before they are officially released. So, we have never had a problem selling. The challenge has always been how to meet demand and make the albums available for those who want them all over the country. With no formal infrastructure for music in this country, that has always been a major challenge.

What's the motivation for you to keep doing music after many years in the game?
The main motivation are the millions of people who love and support this music and who keep requesting for more. Apart from that, to be honest, I don't need any motivation to keep making music. I enjoy doing it!

Why did you study veterinary medicine? Was it by choice or condition?
I was a very bright student, excelling in both the arts and the sciences, but I always wanted to play music and write. Luckily, I was convinced by my mother and teachers that I needed to learn a trade or a skill to make me a better rounded person. And today I am happy I listened to those voices of wisdom - studying veterinary medicine and working for years as a vet doctor has made my music career an easier path to tread.

Would you then say your education was a waste, since you are not practicing what you studied?
Education in any form is never a waste! Also note that university education is a means to an end, not an end in itself. I still practise as a Vet, I still provide consultancy services to people on veterinary-related issues though not as much as I used to do. I am a very dynamic person. I have always been a multi-dimensional character. So, I can be a Vet when I need to be and an artiste when I need to be.

Not many know you are an author. How many books have you published?
Three volumes of textual poetry and a novel, as well as three audio cds of poetry

What are your plans for your writing career?
I write when I feel like, same way I am with music. If I have the materials and the conviction to go ahead, I publish a book. I don't write for awards or such acknowledgement. I write to enjoy and express myself. If it connects with someone, good.

You are known more as a musician. But of prose, poetry and music, which one do you have the most passion for?
I love them all equally. For me, one is an extension of the other.

How do you feel that corporate bodies don't demand for your music brand the way they do for D'Banj, Tuface and co?
I don't know, can't speak for them. Maybe they don't like it.

Fuji artistes sometimes release six albums in a year. Why not so for you too?
I release an album when I feel like it, it's not based on any festive season or any special occasion. If I have enough material that connects thematically, if the funds are available and the spirit is positive, then it's time for a new album.