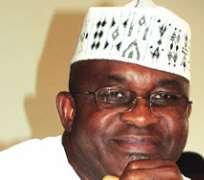 A visibly angry Senate President David Mark yesterday condemned activities of members of State Houses of Assembly, whom he said should wean themselves from the apron string of governors.

Mark spoke at the opening of a week-long induction programme for newly elected state lawmakers organised by the National Institute for Legislative Studies in Abuja.

While reviewing the activities of parliaments at the state level, especially in the last 16 years of the country's democratic experience, Mark said it was improper that members of the state Assemblies have reduced themselves to stooges of their state governors.

The Senate President noted that it was unthinkable that state Houses of Assembly failed to muster the political courage to vote for their financial autonomy when the first constitutional amendment offered them the opportunity. He described the development as a sad commentary.

'As lawmakers, you must avoid holding your sessions in the Council Chambers of the Government Houses.

'It is ignoble to use the mace outside the chamber or borrow Local Government Legislative Council Mace to conduct your affairs or resort to self-help by using your mace to perpetuate violence.

'You must conduct your sittings in line with the provisions of the Constitution and the extant rules of the House.

'As State legislators, you must restrain yourselves from the excessive use of the constitutional provision that empowers you to impeach either your speakers, executive governors or their deputies.

'Impeachment is not designed for a few days exercise. Where it has become the last resort, it must be painstakingly conducted within the hallowed chamber of the parliament in accordance with the extant rules of the House and the Constitution of the Federal Republic of Nigeria.

'The Legislature in Nigeria has a chequered history. But in all its travails, the parliament has stood on the side of the people and intervened at the most critical moments to salvage the system from imminent collapse.

'I have always maintained that the most important legacy of the legislature in the last 16 years is its commitment to lawmaking, oversight functions and representation to ensure good governance.

'The legislature has also come to be recognized as a watchdog of the Executive and an important link between citizens and the state,' he said.

Mark noted that the Legislature at the national level has continued to assert its independence and resisted Executive interference.

To be effective, he urged the state lawmakers to conduct themselves in a manner beyond reproach in all their dealings.

Chairman, Senate Committee on Rules and Business, Senator Ita Enang, who delivered a paper on 'Legislative Procedures and Practice in state Houses of Assembly', described the state legislatures as a department in the governors' offices.

Enang faulted the gale of impeachment across the country and alleged that most of them were instigated by governors who had taken the state lawmakers as tools they can use anyhow to achieve their desired objectives.

He said the procedure for impeachment of a governor or deputy governor should be clearly stipulated in the Standing Orders.

He said: 'This does not imply intention to impeach, but this should be clearly stated to avoid the 'dishonour' that some Houses of Assembly have earned on this subject.

'I urge the President of the Senate, the Chairman of the National Assembly and Chairman of Trust of the Legislature in Nigeria that we collectively fashion out a constitutional process of protecting the legislature at state levels.

'It is now treated lower than paraststatals or bureau by the state governors, otherwise the shame and humiliation meted upon Rivers and notorious Ekiti State House of Assembly would repeat itself.

'Evil thrives when good men, who feel comfortable on their seats, do nothing.'