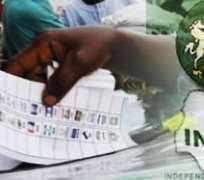 The tribunal gave the verdict on Monday after entertaining a motion by Chief Niyi Akintola (SAN), who is the counsel to the Governorship candidate of the All Progressives Congress (APC), Alh. Mohammed Inuwa Yahaya.

The gate of the Government House in Gombe State was last Friday shut against a court bailiff, Mohammed Dawaki who went to serve tribunal processes on the governor.

At the resumption of the hearing of the election petition of the APC on Monday, Akintola, who is the counsel to the party's candidate, Alh. Yahaya filed an application for substituted service.

In his ruling, the Chairman of Gombe Governorship Election Petition Tribunal. Justice M. O. Adewara, said: 'In a matter of motion ex-parte seeking for: an order granting leave to the petitioners/ applicants to serve the 1st Respondent (Governor Ibrahim Dankwambo by substituted means to wit: by delivering the originating process i.e. petition, witness written disposition, list of witnesses, list of documents and all front-loaded process meant for the 1st Respondent (Dankwambo) in the suit to the Peoples Democratic Party state secretariat, Gombe State;

'And /or pasting same at the entrance gate of the Government House, Gombe on Monday, the 11th day of May 2015.

'Upon reading the Motion ex-parte filed on the 2nd day of May 2015 and the supporting affidavit of Tunji Ogunrinde and after hearing Chief Adeniyi Akintola (SAN) with A.B. M. Bello, A.U. Barde and Oladele Oyelani for the petitioners/ applicants, it is hereby orders as follows: (1) The application is granted as prayed.'

Also, in the petition to the tribunal, the APC and its governorship candidate alleged that some of the results from 11 Local Government Areas in the state were either inconclusive or marred with all sorts of grandiose electoral malpractices.

The APC and its candidate sought the following reliefs:

'An order declaring him and the APC as the winner of the Governorship Election of 11th April 2015 in Gombe State having scored the highest number of lawful votes of the total cast in the said election.

'An order compelling the 3rd Respondent (the Independent National Electoral Commission) to withdraw from Governor Ibrahim Dankwambo and the Peoples Democratic Party (PDP) the Certificate of Return as the validly elected Governor of Gombe State in the Governorship Election held on 11th April 2015.

'An order compelling INEC to present to APC Governorship candidate, Alh. Mohammed Inuwa Yahaya as the validly elected Governor of Gombe State in the Governorship Election held on 11th April 2015.'

In the alternative, APC and its candidate, Alh. Mohammed Inuwa Yahaya sought for an 'order nullifying the entire governorship election conducted in Gombe State on 11th April 2015 on the grounds of corrupt practices or non-compliance with the Electoral Act 2010.'

The APC and its candidate averred as follows: