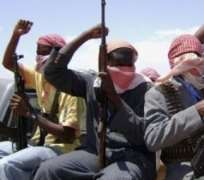 Boko Haram is fracturing as shortages of weapons and fuel foment tensions between its foot soldiers and leaders, women rescued from the Islamist jihadi fighters by Nigerian troops told Reuters.

The group abducted an estimated 2,000 women and girls last year as it sought to carve out an Islamic state in the northeast of the country. The army has freed nearly 700 in the past week as it advances on Boko Haram's last stronghold in the vast Sambisa forest.

The militants began complaining to their captives about lacking guns and ammunition last month, two of the women said, and many were reduced to carrying sticks while some of their vehicles were either broken down or lacked gasoline.

A 45-year old mother of two, Aisha Abbas, who was taken from Dikwa in April, said the fighters all had guns at first but recently, only some carried them.

Even the wife of their captors' leader, Adam Bitri, openly criticised him and subsequently fled, two of the women said, with one describing Bitri as short and fat with a beard.

Of the 275 freed captives brought to a camp for internally displaced people in the Malkohi on the outskirts of Yola, the Adamawa State capital, only 61 were over 18, and many small children hobbled around visibly malnourished.

The women said they were kept inside, occasionally brought food and sometimes beaten severely. The children were left to run around or do errands for Boko Haram while those of the fighters were trained to shoot guns.

'One evening in April, Boko Haram followers stood before us and said 'Our leaders don't want to give us enough fuel and guns and now the soldiers are encroaching on us in Sambisa. We will leave you,' one of the women, 18-year old Binta Ibrahim from Adamawa State said.

'They threatened us but after they went we were happy and prayed the soldiers would come and save us.'

The women said once the militants spotted two helicopters circling at noon on the day of their rescue, they began trying to sell the women for up to N2,000 each.

Towards evening, as the army approached, the captives refused to flee with the Boko Haram fighters, who began stoning them but then ran away.

'We heard bullets flying around … we lay on the floor. Some of the women were crushed (by army vehicles) and others wounded by bullets. Eighteen were killed. We counted them, they included infants,' Salamatu Mohamed from the Damboa area in Borno State said. The defence ministry was not immediately available for comment.

Mohamed said she gave birth while in captivity and had trouble feeding her newborn as there was not enough food.

The women said the men frequently threatened to sell them or bring them to Boko Haram's elusive leader, Abubakar Shekau, deep in the forest. The military has claimed to have killed him several times. But the Defence spokesman, Chris Olukolade, told Reuters the man was not a priority target.

Hanatu Musa, a 22-year old mother kidnapped in June from Gwoza in Borno State, quoted the fighters as saying their leader had deceived them into fighting and killing in the name of religion.

While the military, which launched its counter-attack in January, is confident it has the group cornered in the Sambisa nature reserve, a final push to clear them from the area has been curtailed by landmines. Agency report