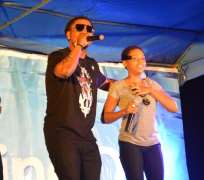 Pop singer Chidinma may be heading to the altar soon, though not knowing, following a hilarious onstage proposal at the Calabar pre-Trek gig last night ahead of today's opening Star Music Trek concert.

Chidinma, who came in as a surprise performer for fans, had a wonderful time at the pre-Trek gig. While interacting with a Calabar Comedian onstage, she was asked to repeat a statement in Efik which she did, only for the audience to burst into uncontrolled laughter.

Upon asking what it was that she said, it was revealed that she had just accepted a marriage proposal in Efik in front of a huge Calabar crowd.