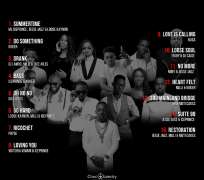 Lagos| Nigeria: After teasing us with two critically acclaimed singles, Summertime and Suite 99 over the past month, Audu Maikori’s Chocolate City Music label has released ‘The Indestructible Choc Boi Nation’ exclusively on Star Music App. The album is a compilation of 15 songs by 13 talented artistes, serving as the flagship project to introduce the next chapter of the Chocolate City Story; Choc Boi Nation.

In addition to featuring founding members of the unit, MI, Ice Prince and Jesse Jagz, The CBN album also introduces the newest members of the Choc Boi Nation; Koker and Milli.

With a shocking announcement of the return of Jesse Jagz a couple of weeks ago after a 3year exit from the label, the 3 founding members are reunited, and following the merger of Chocolate City & MI’s Loopy Music, have grown from 3 to become 13.

It seems the Choi Boi Nation is ready to claim their spot as the Number 1 conglomerate in Africa.