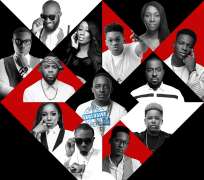 LAGOS | NIGERIA: After weeks of heavy speculation, the rumoured collaboration project from the newly restructured Chocolate City Music label has finally been confirmed.

It will be recalled that the new record label, a merger of Audu Maikori's Chocolate City and M.I’s Loopy Music was announced at the 2015 Nigerian Entertainment Conference ( NECLive 3) on April 22, 2015 at the Eko Hotel & Suites, Victoria Island, Lagos during MI's presentation.

The label members of the former Chocolate City have been in the news a lot lately since the surprise return of Jesse Jagz to the label, as well as release of critically acclaimed singles Summer Time and Suite 99 which were released first on the Star Music App.

Speaking exclusively to Star Music, M.I. said, “We are very proud and excited to enter this new chapter in our individual and collective careers and are particularly delighted to partner with the premier Nigerian music mobile and web platform to bring the music to our fans. We have so much good music for our fans and we are eager to explore this avenue for reaching them.”

M.I. also confirmed that a general release of the album will then follow two weeks after its exclusive release on the app.

Star Music App is available for free download on Google Play . Alternatively, the mobile site , which has the complete functionality of the App, is open to non-Android users.