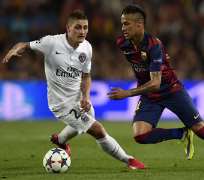 Neymar and Lionel Messi were on target as Barcelona eased their way to a 2-0 win at local rivals Espanyol to increase their grip on top spot in the Primera Division.

Brazilian Neymar struck after 16 minutes to put Barcelona on their way to victory, with Messi scoring from a tight angle nine minutes later to double the lead.

The only negative for Luis Enrique's side was the sending off of Jordi Alba for earning two quick bookings, but the league leaders continued playing as though they had an extra man and could have extended their lead.

Atletico Madrid comfortably beat Elche 3-0 at home to resume normal service after being eliminated from the Champions League by Real Madrid in midweek.

The visitors came through the first half unscathed but fell behind to Antoine Griezmann's header on 55 minutes. Raul Garcia doubled the lead before Griezmann pounced again, scoring a double for a third consecutive league game.