Shell Oil divestment: An open letter to the Ogoni people on OML 11 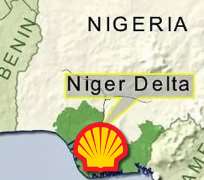 The National Union of Ogoni Students’ USA wishes to thank the people of Ogoni for their steadfastness and total commitment to the Ogoni struggle as championed by the Movement for the Survival of the Ogoni People (MOSOP). We also congratulate our people for keeping the struggle strong and alive for over 22 years against all odds. We pray that the Almighty God will continue to strengthen and guide us till success is achieved.

Now, it is an open secret and common knowledge that Shell Oil Company is auctioning its infrastructure including flow stations together with associated gas infrastructure, oil and gas pipelines, and office facilities in the Niger Delta. Only penultimate weeks ago, the firm divested OML 29, a 600 thousand barrel per day facility, which covers Nembe, Santa Barbara and Okoroba fields and facilities. It divested the asset for $1.7 billion. We want to acquaint our people with the trend and ferocity with which Shell Oil is following up with plans it developed in 2009 to auction its way out of its liabilities in the onshore oil sector in the Niger Delta.

In 2014, we discovered plans by the oil giant to secretly divest its 30% holding in the 750 million barrels Oil Mining Lease (OML 11). The company was put on notice which slowed the sale of the oil block. Shell Oil is a fighter that will employ its huge oil resources to bring down an opposition. That is what we have observed through recent crisis erupting in Ogoni villages most of which are attributable to bribes, innuendoes, and propaganda by Shell Oil Company using a proxy Belema Oil Limited.

We have observed that, Shell Oil Company, insiders and politicians are on a covert hostage take-over mission to acquire the 23 lucrative oil fields that constitute Ogoni Oil block at all cost. We discovered that their point person (Mr. Jack Tein Jr.) of Belema Oil Limited, is drumming-up support in its inquisition to obtain social license from the Ogoni community. Although we are not surprised, we are sickened by the level of tension, Shell Oil re-entry is generating, and the innuendoes and staggering amount of bribes tailored toward the hostage take-over plan.

As true sons and daughters of Ogoni, we owe a great duty to Ogoni to speak up and particularly encourage our people to be patient, vigilant, steadfast, and watchful because the oil sale and tactical maneuvers by the oil predator deals directly with the nitty-gritty of Ogoni inheritance and existence. Ogoni demands in the Ogoni Bill of Rights are just and meet the world’s approved standard, which is why the world continue to honor Ogoni request to keep Shell Oil Company and Nigerian government off Ogoni-land.

Ogoni is a Christian nation; as such we want to bring a biblical analogy into the present situation that bedevils Ogoni-land. In historical biblical parlance, Isaac fathered Esau and Jacob. Esau was by birth the first son in the line of descendant to inherit his father’s inheritance. Esau could not wait or endure one more hour of hunger. The hour that he would have used in preparing his food and enjoy it and still remain the first son to inherit the blessings of his father Isaac. His lack of patience and self-control engineered the sale of his birth-right for a plate of food that barely lasted in his stomach for 24 hours.

Ogoni people let us not mortgage our property that was paid for in blood for crumbs from Belema Oil Limited because of lack of patience. We shouldn’t forget the thousands of lives lost including the Ogoni 9 and 4. We should remember that Ogoni lost many communities to Ndoki including Oyigbo, Lekuma, Muumba, Boobe, Oloko, Ledor, Tumbee; and now we are again losing Ekporo and Gio Kpoogoh to Okrika. In our petition, we are drawn to Ken Saro Wiwa’s invocation to the Ogoni people, “I urge you therefore to keep faith, stand firm, remain strong and believe in God. Work hard, and remain united. Say No to injustice and oppression. The oppressor is weakening. Justice shall prevail. Ogoni will win. Ogoni must survive.”

Shell Oil Company and Belema Oil Limited had poured so much propaganda and money into Ogoni area such that high level tensions between two opposing groups exist presently in our motherland. In opposite divide are those in favor of Oil extraction before environmental clean-up and those opposing the sale of OML 11 because Shell Oil no longer owns the oil block after twenty-one years of absence from Ogoni-land. Also, the only chance Shell Oil had to return to Ogoni after paying adequate compensation and cleaning our environment was lost on November 10, 1995 when it sanctioned the execution of the Ogoni 9. Therefore the company has no claim to our oil or any asset in Ogoni by any standard. If Shell Oil Company was not taking account of the later argument why does it send Belema Oil Company on an expedition to acquire signatures from the Ogoni people?

If it had assets in Ogoni-land rather than liabilities why couldn’t it divest its purported assets in Ogoni-land as it did in other Niger Delta communities without community involvement; and not even the involvement of their state governments? If after the 1995 genocide in Ogoni, we now turn around and hand back Ogoni resources to the same people who for 58 years considered us sub-human, the people who enslaved us, strangled our economy, marginalized us, who killed our relatives, raped our women, rendered thousands homeless and propelled Ogoni people to embark on an exodus into exile as refugees, would it not amount to trading the lives of those who sacrificed and died for us to gain control of our property? Ogoni ARISE, for we will never allow greed and impatience drive us to extinction.

The notion that some Ogoni persons are already singing Shell Oil songs by injecting divisive languages or phrases “Oil and non-Oil producing communities” into Ogoni vocabulary is worrisome. We urge the Ogoni people not to fall to such gimmicks. Such languages are calculated stunts and ploy aimed at pitting one community against another. The Ogoni people should know that, if there is a seismic activity, acid rain, public health epidemic, oil slick, blow-out, or spillage, no Ogoni community would be speared. Ogoni biosphere, ecosystem, water, air etc. are so inter-connected and the argument building around “Oil and non-oil producing communities’ lacks merit and exposes the perpetrators of such innuendoes to mockery. Ogoni people know better than the bags of rotten fish Belema Oil and Shell Oil Companies are selling. How come such innuendoes not tenable when monies from Ogoni oil sale and revenues from electricity build on our land at Afam are used to build Abuja, and develop Jigawa, Sokoto etc. that produce zero barrel of oil or electricity grid? Ogoni people must wave Shell Oil and her proxy Belema Oil goodbye for HELL is gone for good forever.

Ogoni people, Mr. Jack-Rich Tein Jr. of Belema Oil Limited was on Al Jazeera America on March 15, 2015 promising Eldorado to the people of Ogoni and the Niger Delta region if his company wins the Oil block. Any reasonable Ogoni people should ask the question, where does Mr. Jack-Rich Tein Jr. who graduated few years back acquire the capital for such capital intensive project as the acquisition of Shell Oil assets, obtain money to throw around in Ogoni, lobby Shell Oil Company, and reserve spots on local, national, and international media? What major contract/s has Mr. Tein won that could be sited as a benchmark in his operation and compliance with national and international environmental laws? Is Mr. Tein Jr. and Belema Oil Limited only a masquerade for the multi-national Oil giants? Apart from his promises to transform Ogoni-land to a paradise on earth, has he and his company produced any blueprint for the clean-up and remediation of Ogoni environment? Is his argument substantive enough that what a multi-national corporation like Shell Oil Company (with all its money, influence, and technical capability) could not accomplish in 57 years, he and his three years old company could? What gave Belema such confidence? Ogoni people, we have to ask questions because we have at one time or another agreed to Ogoni creed that, “we shall no longer allow the world to cheat us”.

Shell Oil Company and Belema Oil Company are guilty in court of public opinion but some of our people are culpable as well.Legbosi Pyagbara and his executives should be advised to disengage from anti- MOSOP activities. Some Ogoni people are assuming the role of consultants, hoping they would become multi-billionaires after the oil sale. Really?, The holy scripture doesn’t lie because after Judas betrayed Jesus, His master, the thirty pieces of silver compensation from the authorities became too hot that he returned them and committed suicide afterward. We hope no Ogoni person will betray our forebears. Ogoni has no room for a Judas because oil exploration has turned Ogoni into a waste land. Ogoni-Land, Rivers, and air are totally polluted and the atmosphere poisoned such that Ogoni now has world record as the most polluted nationality on earth. Ogoni bagged this award because of poisonous gases like benzene, hydrocarbon, methane, carbon monoxide, carbon dioxide, and gas flaring emitting 24 hours a day, 365 days a year in close proximity to human habitation.

Ogoni people, this has been a long essay but we beg for your pardon because it is important to inform you that oil companies do not, have not and will not develop any community where they explore and exploit natural resources. What will develop Ogoni and end poverty is a fair share of our oil proceeds that we keep which is what the Ogoni struggle is all about.