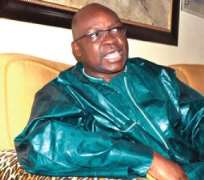 An aide to the Governor of Osun, Ogbeni Rauf Aregbesola, Mr. Semiu Okanlawon, has debunked the allegation that the state governor has provided security personnel, financial and other logistics backing to the Speaker of the Ekiti State House of Assembly, Dr. Adewale Omirin.

Okanlawon expressed disgust at the publication which reported that a detachment of policemen have been drafted from the Osun State Government House while a sum of N175 million was given to the Speaker, Omirin and other members of the APC in the House of Assembly, in their alleged efforts to remove Governor Ayodele Fayose.

“I find the publication distasteful. Those who scripted this from the Government House of Ekiti and sent to media houses appear to have lost all sense of logic.

“How does a Governor release his own security men to move to another state to provide security for another political office holder? And how do policemen attached to a principal leave their duty post to travel to another state for such assignments without the knowledge of the command to which they are attached?

“This is why we have always insisted that the entire gamut of the Peoples Democratic Party is a fraud. How lazy could some people be? Assuming they had such suspicion, is it not for them to make inquiries through the Police Command in Ekiti and the Command in Osun?”

On the issue of the financial support to the tune of N175 million, Aregbesola's aide said it is unthinkable that a government that is working round the clock to ensure payment of salaries would dole out such funds.

“There is no doubt that this was cooked up to set workers in Osun against the government. But that is a plot that failed before it was hatched. Despite the PDP-led Federal Government's economic war on Osun coupled with the dwindling allocations which have caused delays in the payment of workers' salaries, Osun workers have shown great understanding; allowing the government to work assiduously to meet its obligations. How then can a responsible government that enjoys such support from its workers dole out N175million to a political office holder in another state?” Okanlawon asked

The Governor's aide advised Fayose and his aides not to drag Aregbesola into the political crisis in Ekiti state.

“Much as we would want sanity restored immediately in that state that has not known peace for a day since the APC government of Dr. Kayode Fayemi was rigged out of office, we believe that the people of Ekiti know what is best for them without the intervention of any governor.

“The Ekiti people know where the shoes are pinching and they are best positioned to respond to their political pains in the best way known to them.” The aide said.