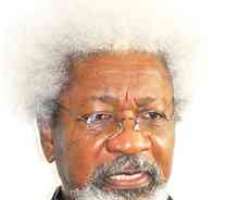 Nobel Laureate, Prof. Wole Soyinka, has described ailing President Umaru Yar'Adua as a victim of spousal abuse. Soyinka, who spoke in Lagos on Tuesday, lamented that even the President's mother could not gain access to him because of a cabal supposedly led by his wife, Turai.

Soyinka, who made the declaration at the Post-Annual General Meeting of the Nigerian Economic Summit Group, said members of the cabal holding the President to ransom were people with flesh and blood but without a heart.

Tuesday was the second time that Soyinka would declare Yar'Adua a victim of spoused abuse. He said the same thing in Lagos on March 16, 2010 during the 60th birthday lecture of poet, Mr. Odia Ofeimun.

Describing Yar'Adua as an unidentified flying object and a 'phantom president,' who went to Saudi Arabia for treatment and came back unnoticed, Soyinka faulted the various reports being presented to the public on his state of health.

According to him, 'There is a collaboration between two prominent religious groups. If you examine the report, one says he could not speak, but both admit that he could use his hands. I want to recommend that a panel of doctors should see Yar'Adua and examine the arm and should determine if the arm can be used to write a letter. If there are doctors with him, why not Nigerian doctors?'

He said Yar'Adua, who was reported to have granted an interview to the British Broadcasting Corporation in Saudi Arabia some months ago, should address the nation, adding that he would also write an application so that the priests of Ogun and Orisa should be allowed to visit the president.

He said for a long time, the civil society became comatose, adding that the current momentum to restore confidence in governance must not be lost as losing it would mean going back to the period of enslavement.

Calling on Nigerians to rally behind the Save Nigeria Group and other well meaning and focused civil society groups, he said every Nigerian had the responsibility to protect his or her vote.

According to him, 'Those who want change must be prepared for some level of sacrifice. PHCN would not have been at this state if the civil society is awake. It is amazing. Followers deserve the kind of leadership they get. In Iran, look at the sacrifice the population has been making against the hypocritical mullahs. The hypocrisy has been resisted. The people rose and continued to agitate. There are other societies like that where people are tortured, raped and hanged.'

Describing the Chairman of the Independent National Electoral Commission, Prof. Maurice Iwu, as an obstacle to the reform of the electoral system, he also condemned the presidential system of government as practised in Nigeria, describing it as a failure.

He said the system was too expensive, self-indulging and had created a neo-imperial system.

'The system is geared towards large scale corruption. It is not beneficial to the country and it needs to be overturned,' he added.