Nigeria’s General Elections—And The Winner Is “Us” 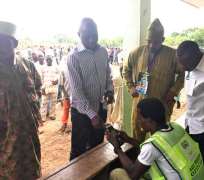 Nigeria, we hail thee,
Our own dear native land,
Though tribe and tongue may differ,
In brotherhood we stand,
Nigerians all are proud to serve
Our sovereign Motherland.

Our flag shall be a symbol
That truth and justice reign,
In peace or battle honored,
And this we count as gain,
To hand on to our children

A banner without stain.
O God of all creation,
Grant this our one request,
Help us to build a nation
Where no man is oppressed,
And so with peace and plenty
Nigeria may be blessed.—Nigerian National Anthem 1960-1978

So the dreaded Saturday 28thMarch 2015 has come and indeed gone, the General Elections has been held, and while we await official announcements, below is my admonition to my countrymen, one which I start with a chat with my very good friend Hawwa

So, what happened in Jos, apart from card reader failure she asked me?

I answered with a big smile, “it was largely peaceful.”

We could not exchange notes because we were busy, myself as media personnel and observer, and herself as a dutiful housewife.

I went on to tell her, “Whatever happens I hope we all can see ourselves as victors.”

“Hope so too”, she responded.
A win-win is what I called it.
And then she asked, “So, whom are you rooting for?
To which I answered, “No one…I know this sounds hmmmm, but never believed in them all.”

She retorted, “You cant sit on the fence, it is not a matter of believe in oooo.”

I then told her that, “it was not about fence sitting, just that I do not see either change or transformation, however I know that for example as long as there was no marshal music, that in itself was significant progress.”

I equally explained that with all the shortfalls inherent in this process, whoever wins, there has been a significant charge forward, and regarding rooting for X or Y to win, I was going to keep my non-partisan status.

I strongly maintained that both men have played their part, and for me, I wanted to see the system win..

I want to see the Nigerian people win, I want to see us take a considerable step in our electoral process, first by having a violence free election, then gradually getting to a free and fair stage and finally the credible part of the entire process.

While we await Jega, the INEC boss and umpire to declare the results officially. I would share this story with us.

One Sunday morning, a wealthy man sat in his balcony enjoying sunshine and his coffee when a little ant caught his eye; going from one side to the other side of the balcony carrying a big leaf several times more than its size.

The man watched it for more than an hour. He saw that the ant faced many impediments during its journey, paused, took a diversion and then continued towards destination.

At one point the tiny creature came across a crack in the floor. It paused for a little while, analyzed and then laid the huge leaf over the crack, walked over the leaf, picked the leaf on the other side then continued its journey.

The man was captivated by the cleverness of the ant, one of God's tiniest creatures.

The incident left the man in awe and forced him to contemplate over the miracle of Creation. It showed the greatness of the Creator.

In front of his eyes there was this tiny creature of God, lacking in size yet equipped with a brain to analyze, contemplate, reason, explore, discover and overcome.

Along with all these capabilities, the man also noticed that this tiny creature shared some human shortcomings.

The man saw about an hour later the creature had reached its destination – a tiny hole in the floor, which was entrance to its underground dwelling.

At this point the ant's shortcoming that it shared with man was revealed.

How could the ant carry the large leaf it carefully managed to its destination into the tiny hole? It simply couldn't!

So the tiny creature, after all the painstaking and hard work and exercising great skills, overcoming all the difficulties along the way, just left behind the large leaf and went home empty-handed.

The ant had not thought about the end before it began its challenging journey and in the end the large leaf was nothing more than a burden to it.

The creature had no option, but to leave it behind to reach its destination.

The man learned a great lesson that day. Isn't that the truth about our lives?

For me and I hope a sizable number of Nigerians, I believe that there is hope, with all it's inherent failure, we have tried the card reader, we have seen the advent of the PVC, all the shortcomings and successes.

However we are far away from really winning if we do not get good governance, if all the hype and excitement does not reward citizenry with a responsive government and leaders that feel the pulse of the governed.

We would be no different from the ant, having done the great, either by continuity or change stuck at the same place—If APC wins would it do things differently from the ANT, and would PDP be credible opposition pushing APC to its limits for the people's advantage, and indeed if it remains PDP, would it keep behaving like the ANT and the APC fizzle out.

I hope that with the process we have endured, when we hear, those lines, having met the constitutional requirements according to XYZ, the winner of the 2015 General Elections would be the Nigerian people and nation, anything short of that we would have behaved like the ANT…

Not only behave like the ANT but also if we do not harness the positives of the just concluded polls, our tribe and tongue will tear us apart, there will be no nation for us to proudly serve, and the much desired peace will continue to elude us…if we have made a better choice—only time will tell.