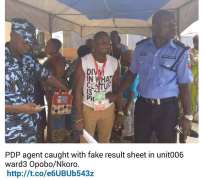 Emerhor in a statement by his Director of Media & Political Communication, Dr. Fred Latimore Oghenesivbe said the rigging process starts automatically in a situation where original copies of INEC results get missing before voting commences, adding that in most of the polling units across the country, particularly in Delta State, the original copies of the result sheets were nowhere near the polling units.

He said the units result sheets ought to be recorded and signed by INEC officials and agents of political parties after votes were counted so as to ensure the genuineness of the process.

The APC Governorship candidate disclosed that in most polling units in the three senatorial districts in Delta State had no INEC original result sheets which implies that election riggers hijacked the process in collaboration with some unscrupulous INEC officials to rig the elections in favour of PDP and Labour Party.

The ideal thing, according to Emerhor, is for the original copy of the result sheet per polling unit be displayed for voters to see before accreditation commences, pointing out that voting becomes absolutely useless where the original copies of election results have been stolen by riggers who secretly fill in figures in their favour for the INEC Resident Electoral Commission to announce as final results.

Dr. Oghenesivbe quoted Emerhor as saying that unless INEC authorities rejects the results of polling units that had no original copies of the INEC result sheets before votes were counted, Nigerians and indeed Deltans will stay away from the governorship elections slated for April 11, 2015.

It will be recalled that there were several reports via social and electronic media across the country that INEC result sheets were missing before voting commenced, a development which makes the entire process vulnerable to sophisticated rigging, the statement added.