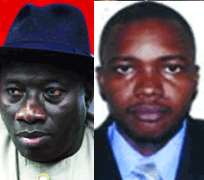 Goodluck and Esele
Penultimate week, the Trade Union Congress (TUC), the second labour house representing senior staff unions in the country, went to the poll in Benin City, the capital of Edo State and returned the incumbent president-general, Comrade Peter Esele, for another term.

The election which was open ballot took place under a peaceful environment without any acrimony and grievances, as whatever could have stiffened the election had swiftly been addressed with all the parties going to the poll without any bitterness. A lesson politicians should emulate.

And to give the election some credence, observers which cut across other affiliates and the media were given access to the hall where the delegates voted. The victory heralds the young and vibrant Esele into the second leg of leading the congress and definitely calls for a new direction in leadership.

Esele, who was the President of Petroleum and Natural Gas Senior Staff Association of Nigeria (PENGASSAN), agreed that the task ahead is daunting. Speaking after his swearing-in, Esele said that the next three years would be very challenging. He promised to improve on his record by moving the Congress to greater heights. The biggest challenge before the Congress is the ability to ensure that Nigeria produces the president every citizen would be proud of.

'Next year, Nigerians will go to the polls to elect new leaders. We are going to watch and monitor the road, every step of the way to ensure that nothing goes wrong. 'We will fight all the way for the electoral reform as well as challenged our people to be involved in the electoral process as our votes count next year determine who will be our president and other political posts,' he said. Comrade Esele lamented that Nigerians had folded their arms for too long, thereby giving rooms for mediocres and corrupt individuals to hijack government.

Insisting that never would workers allow the cash and carry politicians to take over governance, the Congress boss said that the labour house would support all progressive minded individuals and organizations who would ensure that the citizens enjoy the dividend of democracy. 'We will support all progressives both morally and financially to ensure that those that will come in are those that will have the interest of Nigerians at heart,' he said.

Comrade Esele's view was also shared by one of his newly-executives, Comrade Abdul Gafar Mohammed, a National Trustee and president of the Chemical and Non-Metallic Senior Staff Association of Nigeria (CANMPSSAN), who confirmed that the next upheaval challenge before the new executive was to consolidate on the last gain and move forward to impact on the lives of workers and well meaning Nigerians.

'Actions are important while inactions are dangerous at this present time of election in our national polity. We have to lead Nigerians by example, as leaders we must be able to deliver and emancipate our members from the present state of poverty,' he said.

Comrade Mohammed believed said that politicians could learn from the free and fair election organized by the Congress, though he confessed that every election has own flaws. 'In every election, there are bound to be rancour, but with maturity, the leadership of the Congress have been able to bring everybody together, hence we can move forward to contribute our quota to the development of Nigeria,' he stated.

Comrade Gabriel Babalola, former president of Food Beverage and Tobacco Senior Staff Employees (FOBTOB) and an ex-officio member of the present executive, also commended TUC on the conduct of the election, which he noted, was an indication of progress in the organization. 'It shows that we are moving and it is an indication of good things to come. We have been able to resolve our crisis. Here it is not only the big unions that count but we see all ourselves as stakeholders.

'It is only when we have put our house in order that we can make a meaningful contribution to the national politics and there is no doubt that we have a lot to do as we count down to 2011,' he stated.

That the 2011 election was predicated on electoral reform was not only shared by labour unions alone, but all the three governors that attended the delegates' conference.

According to Governor Olusegun Mimiko of Ondo State, every other preparation on the 2011 might well be put on hold until the country sorts out the issue of electoral reform. His Edo State counterpart, Comrade Adams Aliyu Oshiomhole, though supported the need for the electoral reform, he, however, believed that the exercise would be meaningless if the corruption ravaging our social class is not tackled.

The former Nigeria Labour Congress (NLC) boss spoke of the progress the state has been experiencing since the reform that swept off the godfatherism in the state.

He noted that unemployment statistics have reduced drastically while over 7,000 jobs were created within one year. For Governor Isa Yuguda of Bauchi State, Nigeria's problems, be it ethno-religious crisis or whatsoever are caused by the poor state of the economy. 'Nigeria is one of the most blessed nations in the world considering its human capital and numerous mineral deposits. There is no doubt that Nigeria needs a conducive environment and security to attract foreign investors for the economy to grow.'

The newl President-General had earlier urged the three arms of government to ensure that the electoral reform proposed by the Justice Mohammed Uwais Report be given the attention it deserves to save Nigeria from further crises. 'As we approach the 2011 election expectedly, we have our anxieties and fears given the culture of rigging, god-fatherism, monetization, thuggery and violence that have become entranced in our system.

'Like in the past elections, all of these vices associated with our past electioneering process and elections might be a foretaste of what to expect in the 2011 general elections,' Esele warned.

He stated that 'given the enormity of these problems, we cannot afford the luxury of folding our hands and watch the situation with stoic, nor can we surrender to the whims and caprices of moneybags, godfathers and election riggers, who see the electioneering process and the elections as money-making ventures. We urge our members wherever they are in the country, to rise to the occasion and fight to defend their votes.'

Noting that the President and the Inspector-General of Police must appreciate that the rule of law and the foundations of democracy would be endangered if the credible elections are compromised.

Commending Acting President Goodluck Jonathan for the success recorded in the February 6, 2010 Anambra State governorship election. Comrade Esele said though it was not yet an Eldorado, but it was a step in the right direction. 'While the election was not particularly devoid of hitches, we have seen that with the political will and commitment from the leadership, a free, fair and credible election/electioneering is attainable,' he stressed.

Another hurdle, before the Congress is in the area of job sustainability and ensuring that workers earn a living wage and well-motivated. 'One of the contending issues that we faced was the debate over an improved wage packages for the Nigerian worker. 'We had argued time without number that the existing remuneration packages cannot guarantee basic needs associated with the social status of most Nigerian workers and their dependants. This is because real wages have declined while money wages remain inadequate.

'TUC has presented its position to the committee and we understand what Federal Government may commence the implementation of the new wage soon. On unemployment which he said was the number one problem in the nation, Esele maintained that the challenge of national development is to manage the economy so as to promote job - led growth rather than the present situation of jobless growth.

'There are various ways through policy and direct intervention that one will expect the government to create employment. 'The country currently has housing deficit of about 16 million units for its citizens. An investment in the provision of mass houses will create over a million, direct and indirect jobs, thereby stimulating the economy,' he said. The union leader lamented that though in 2050, Nigeria's population at the current growth would be 300 million people, but there has never been any policy to address the looming challenges.

Insisting that this is the time to act, Esele emphasized that the present administration must put in place a more attractive business environment for the organized private sector to partner in the provision of expansion of infrastructure at all levels to enable it rise to the occasion and drive the process of employment generation.

The Congress no doubt has lost confidence in the present polity and hence it was ready to take the bull by the horns in terms of offering exemplary leadership.

'We have always agonized about our plight in the society. The time has come for us, to take our destiny in our hands, by organizing ourselves into a formidable force for change for the benefit of our future generation. We must be interested in who and how leaders are chosen. The punishment for the wise is to be governed by the fools,' Esele added.