How Ohakim Loots Imo State: A Challenge To Efcc & Office Of Inspector General Of Police 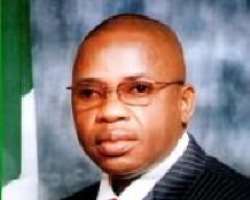 The debacle that have become the SCAM Adhoc probe panel set up by the speaker of Imo State House of Assembly is a clear testimony that there is a conspiracy between the Executive and the Legislature to protect the Governor of Imo State Chief Ikedi Godson Ohakim and prevent him from being exposed as a rogue in the eyes of the Law.

There has been persistent and continuous calls by Imo citizens urging the now disgraced and humiliated Imo State House of Assembly to invite patriotic citizen – Ikenna Samuelson Iwuoha along with his conditions to prove all his allegations of looting the State Treasury against the Governor of the State, Chief Ikedi Godson Ohakim.

Nonetheless, this writer (Mr IKenna Samuelson Iwuoha) has refused to be cowed to abandon his crusade against criminalities and bad leadership of Ikedi Ohakim and his gang. I have gone so many steps ahead to prove that the resources of Imo State is bleeding and practically begging for mercy. Despite threats to my life and that of my wife and two children, I have continued to soldier on.

The question now is, when will Chief Ikedi Godson Ohakim and his criminal gang be arrested and paraded before the Nigerian Public as the mastermind of criminal looting and other activities in Imo State? Is it when the people of Imo State will take laws into their hands by executing the “ROMANIAN” agenda? What do I mean? When it became obvious that President Niccoleau Ceanceasceau of Romania was stealing, looting and confiscating economic activities in that country, the citizens complained bitterly to the National Assembly to do “something”. This was ignored. Then Radical opinion writers in that country took the courage to list all the atrocities of President Niccoleau Ceanceasceau. It was after this was done that the people of Romania went on a peaceful demonstration in 1989. However the President ordered the Army to crush the innocent peaceful civilian demonstrators. The order led to full blown demonstration which culminated in the capture of the President and his wife NANCY by the civilians. They were publicly executed naked in 1989.

Conversely, it appears this is the only option left for the good people of Imo State to rescue their State from this man who has no shame and face in the State. I say this because the Imo State House of Assembly are already comrade in crimes with Ikedi Ohakim. Also “notable” citizens in Imo State like Mr. Chikwem Onuoha, Emma Ohakim, George Irechukwu, Kezie Ogaziechi, Willie Amadi, Chinedu Chukwuonye, Tony Chukwu, Maurice Iwu, HRH Eze Ikechukwu Ilomuanya are comrades in crime with Ikedi Ohakim in the looting and stealing of the resources of the State.

Further more, Ukpakareports.com, an online news journal worldwide exposed and published my petition to the Office of the Inspector General of Police and EFCC with the caption “CHIKWEM ONUOHA: The Face of a Money Launderer”. Till this moment, relevant authorities are yet to move into action by arresting this money launderer called Chikwem Onuoha who launders money for Ikedi Ohakim. It is also on record that more than 52,000 e-mails belonging to Nigerians have copies of information that has exposed the Governor of Imo State Chief Ikedi Godson Ohakim as not only a thief but also a criminal. Yet the EFCC and the Office of the Inspector General of Police are busy chasing ordinary “Pick-Pockets” and minor thieves when a major rogue like Chief Ikedi Ohakim is roaming about in Imo State.

I cannot conclude this piece without sounding it loud and clear that members of the Imo State House of Assembly led by Speaker Goodluck Opia are bunch of nonentities and thieves who will never seek re-election again to the Imo House of Assembly or indeed any other elective post in Imo State. I say this because they have already indicted themselves for collaborating with Chief Ikedi Ohakim to loot the resources of Imo State and by refusing to invite me to prove my allegations against Ikedi Ohakim.

To conclude, when equal is added to unequal, all will be unequal. This is the case of Imo State government led by Ikedi Ohakim.