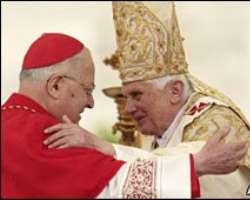 The Pope's preacher has apologised for comparing criticism of the Catholic Church over child abuse to “collective violence suffered by the Jews”.

At Easter Mass in St Peter's Square a top cardinal said the faithful were not affected by “petty gossip”.

He was referring to a child sex-abuse scandal that has engulfed the Church.

Pope Benedict XVI did not refer directly to the crisis in his Easter address, but he said humanity was suffering from a “profound crisis”.

This required a “spiritual and moral conversion”, he said.

“It needs the salvation of the Gospel, so as to emerge from a profound crisis, one which requires deep change, beginning with consciences.”

After offering prayers for victims of crime, conflict and natural disasters around the world, he added:

“Easter doesn't work magic,” he said. “After the resurrection the Church always finds history filled not only with joy and hope but also with pain and anguish.”

'Truly sorry'
Allegations of abuse – many dating back decades – have put pressure on the Church recently in countries including the Pope's native Germany, Ireland, Switzerland, the Netherlands, Austria, and the US.

The remarks by the Pope's personal preacher, Fr Raniero Cantalamessa, were made in a Good Friday sermon in front of the Pope and provoked anger among Jewish groups and victims of sex abuse.

In an interview with Italy's Corriere della Sera newspaper, he said Pope Benedict XVI had not known the remarks would be included in the sermon.

“I am truly sorry to have hurt the feelings of Jewish friends,” he said.

He also said he did not think one could compare anti-Semitism to the “attacks on the Church in these days”.

He said he and the Jewish friend he had quoted in his sermon had meant to point to “the use of stereotype and the easy passage from individual to collective guilt”.

The Vatican said earlier that Fr Cantalamessa's remarks did not represent its official view.

During Mass in St Peter's Square Cardinal Angelo Sodano, dean of the College of Cardinals, paid tribute to the Pope as he wished him a happy Easter.

“Holy Father, the people of God are with you and will not let themselves be influenced by the petty gossip of the moment, by the trials that sometimes assail the community of believers,” the cardinal said.

A week ago, with the Church already under pressure over the abuse allegations, the Pope said his faith would help give him the courage to deflect “petty gossip”.

Pope Benedict has not made any explicit comment on the issue since he penned a letter apologising for child-abuse in the Irish Church late last month.

The pontiff has been accused personally of failing to take action against a suspected abuser during his tenure as archbishop of Munich – a claim the Vatican strongly denies.

Critics also say that when he was prefect of the Congregation for the Doctrine of the Faith, which deals with sex abuse cases, he did not act against a priest in the US state of Wisconsin who is thought to have abused some 200 deaf boys.

The Vatican's official newspaper, L'Osservatore Romano, stepped up its defence of the Pope in its Sunday edition, publishing messages of support from around the world and denouncing the “slanderous attacks and the defamation campaign surrounding the drama of abuse by priests”.