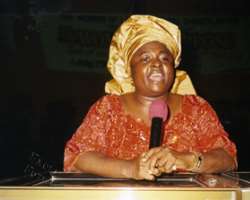 After six years of standing trial following a legal action instituted against her by the National Films and Video Censors Board for illegally exhibiting her films without obtaining a censorship certificate issued by the regulatory body, Apostle Helen Ukpabio has been left off the hook.

The multi-talented movie producer, writer and minister of God celebrated her victory at the celebrity hangout, O'jez Entertainment, in Surulere, within the week. Ukpabio, who broke down while narrating her touchy story, expressed satisfaction with the way the case ended in her favour.

She described the judgement as a “victory to Nollywood”, adding that while the trial lasted, her business, including her personality and ministry suffered a terrible setback. The case has lingered for the past six years in an intensive legal gymnastics.

Ukpabio was taken to court on a one-count charge of exhibiting some of her films without obtaining a censorship certificate issued by the censors board for such exhibition, thereby committing an offence punishable under section(34)2 of the Censors Board Act No 85 of 1993, contrary to section 34 of the same Act. The films, according to her include, “Coven 1”, “The End of the Wicked” and “Child Rescue.”

Mr. M. Owumi of the Magisterial Court of Lagos State, in his five-page judgement delivered on March 24, 2010, discharged and acquitted the defendant, following the discrediting of the evidence of the prosecution witness, making it difficult for him to “safely convict or call on the defendant to enter into her defence.”

A mother of three and General Overseer of Liberty Foundation Gospel Ministries based in Calabar, Cross River State, Ukpabio has had it rough with the censors board. Few years back, she lost a legal battle with the board over the claims that her film entitled “Rapture 1&2″ had been deemed ineligible for release because it was a direct attack on a particular religious sect; it was alleged that she infused the film with inflammatory anti-Catholic images.

According to the film maker, “I didn't find it easy at all. I could have been jailed as a church leader and a film maker. Several of my films were turned down by the board. I did a film called “Child Refuge”, which the censors board refused to approve. They said because of the fact that I took the board to court, my films would no longer be approved by the board. Before now, I used to produce three movies per year. But since the legal battle against me started, I have not been able to produce a single film in the past two years.

Ukpabio's lawyer, Festus Keyamo said, the celebrated film maker was discharged and acquitted unblemished,”adding “it's not easy to stand a criminal trial.”