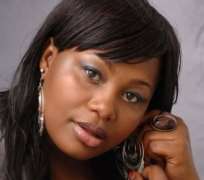 She may not be in the big names of Nollywood actresses, but Adaora Ukoh is not one to be ignored at any event.

With all the scandals that may have trailed her on the road to stardom, Adaora is still pushing on and striving to make a statement.

At an award held in Lagos recently, Adaora was her usual self, demonstrating her love for skimpy clothes.

While many actresses and celebrities serenaded the hall in ball gown and evening dresses, Adaora chose to look different by decking leggings and a strapless top that almost pushed out her 'mammary glands'.

As if those were not enough sources of attention, she also fixed very long false eyelashes and her wild afro hair brought her more condemnation than admiration.

But much as whispers were going on as she passed, the actress didn't seem to mind. She still made sure she was noticed by all who came for the event.