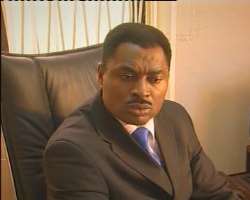 Nollywood practitioners, stakeholders, associates as well as dignitaries from both the public and private sectors are set to storm the forthcoming world premiere of Dry Waters.

The anticipated evening of fun, relaxation and networking holds on Saturday, April 17, 2010, at the upscale Terrakulture, Victoria Island, Lagos; amid cheers and banters.

Onyechere, who's the current Treasurer of the Association of Movie Producers (AMP), further promised to make the event grand and memorable for all the specially invited guests coming, adding that the premiere would further reposition Kech Production Studios, her outfit, within and outside Nollywood.

Directed by Kelvin Ibanichuka, the suspense- filled two-hour movie, also boasts of some leading names plying their trade in Nollywood. Among them are: Monalisa Chinda, Kenneth Okonkwo, Paul Obazele, Chidi Ihezie- Okafor, Remy Ohajianya and a host of others.

Screen-played by Adim Williams, Dry Waters is thematically woven around critical family issues and how such issues could affect the larger society, if not properly handled from the foundation stages. “I have produced and funded over a dozen films in Nollywood, but decided to premiere this one elaborately, because it's a story very dear to my heart.

Dry Waters, was painstakingly shot over a period of six months, We intend to immediately begin the cinema showings after the world premiere, so that movie buffs can come out to watch and applaud what we are offering them. We look forward to welcoming and entertaining all at the premiere …” Onyechere declared.

Surprisingly, Nollywood, which was on the verge of collapsing last year, due to several internal and external crises is fast opening up to world class premieres, such as this one. The premieres are also gradually helping to revive and reposition the industry for greater challenges and prospects.

Meanwhile, it is pertinent to note that the premiere of Dry Waters, is following in the footsteps of Jungle Ride, which held a couple of weeks ago, at the posh Silverbird Galleria.