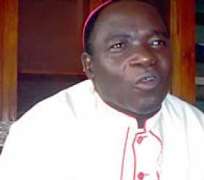 Kukah stated this while speaking at a forun at the Catholic Secretariat in Abuja.

'A lot of our difficulties are tied to the calibre and quality of people who have governed this country.

The cleric explained that most Nigerians lack patriotic zeal, noting 'this is the reason why we are having problems with our democracy.

The Secretary General of the CSN, Rev. Fr. Ralph Madu said the country needs to reflect on its democratic journey so far, taking cognizance of the present electoral period.

He admonished youth to refuse be used by unscrupulous politicians to perpetrate violence before, during and after elections, but turn out en masse to perform their civil responsibility by voting for candidates of their choice.