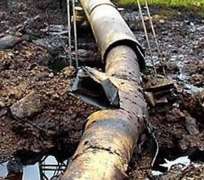 As a major threat to the nation's fortunes, pipeline vandalism is assuming such a grimmer dimension as demands the immediate intervention of the Federal Government, security agencies and other stakeholders.  Obviously buoyed by their successes in destroying pipelines to steal oil, vandals have become more daring in their criminal activities, thereby inflicting untold damage on the nation's economy.

Not only does the Federal Government lose billions of naira to pipeline vandals yearly, some oil companies have been forced to shut down their operations when they could no longer bear the losses owing to the vandalisation of their pipelines. However, it is not only the government and the oil companies that lose. The pipeline vandals are also a danger to themselves and the citizens near their areas of operation as many of them have lost their lives to the explosions in the course of stealing oil from the pipes.

But pipeline vandals have not been discouraged from their nefarious activities by the prospect of this danger to themselves because pipeline vandalism is a reflection of the general collapse of sound values in Nigeria, a society that is mired in primitive material acquisition. Vandalism to its perpetrators is a fast lane to easy money. The menace of pipeline vandalism was previously only associated with the Niger Delta and it was in response to the activities of the vandals that the Federal Government set up the Joint Task Force (JTF).  Now it has spread to other parts of the country.

It is worrisome that over the years, vandals have notched up their criminality by moving from  destroying  pipelines of the Nigerian National Petroleum Corporation (NNPC) and stealing oil, to killing security agents. A few days ago, a clash with security agents resulted in the death of two policemen and a motorcyclist while two officials of the Nigeria Security and Civil Defence Corps (NSCDC) in the Ikorodu area of Lagos are still missing.

It is, therefore, necessary that the government should  strengthen its security apparatus to stem the tide of pipeline vandalism and oil theft. Apart from supporting the regular security agencies such as the police to fight this crime, it is on record that government also awarded contracts to private individuals and companies to secure the pipelines.  But the fact that pipeline vandalism is still rife shows that there is need to do more. Obviously, such contracts awarded to individuals have not been helpful because they are suspected to be vehicles for political patronage.

In fact, those who have the responsibility of securing the pipelines have been suspected of being the masterminds of the biggest theft. This may account for the brazenness and the sophistication of the weapons the vandals use for their activities and the difficulties in checking them, arresting them and bringing them to book.  Worst still, plans to check the criminals  are sometimes frustrated by unnecessary inter-agency wrangling. There is also the need for communities to assist in checking pipeline vandalism, for it is safe to argue that in most cases, the communities know the vandals and they are, therefore, in a good position to stop  their activities. But one hindrance to getting the support of such communities in this regard is that they somewhat feel neglected by the government and the oil companies that exploited their products from their area but fail to develop them. So, no sense of ownership has been cultivated and the citizens merely sling off the vandals. It behoves the government to develop those communities as this would give the people the consciousness of being  beneficiaries of the oil pipelines and thus the need to protect them.

On account of the nation's dependence on oil as its major source of revenue, Nigeria has everything to lose with a poor protection of the oil pipelines. And it is not enough to concentrate only on the Niger Delta area when the menace is already destroying the economy in other parts of the country. The campaign against pipeline vandalism should, therefore, be driven with fresh impetus from the government at all levels, by the oil companies and communities.