WITH ROBBERS' BULLETS IN HER HEAD, POLICEMEN ABANDONED HER TO DIE 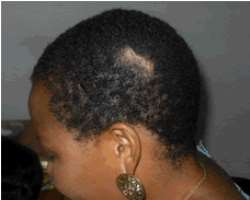 Irabor
On February 27, 2010, at 5pm, a 42-year-old woman, Mrs. Franca Kanwulia Irabo, left her home for Okokomaiko, in Lagos, to make her hair in the company of her young daughter. Ordinarily, she would have walked the distance of less than one kilometer from her home but decided to go by bus.

As they progressed, there was no inkling that the evening would re-write her story.

The woman said: 'There is a popular place under the tree, at the bus stop in my area, where women do their hair. I got there about 5 pm and by 7 pm, when I was through, I boarded a danfo (commercial bus) from Okokomaiko to my bus stop, PPL, with my daughter. The next bus-stop is Cassidy. We sat directly behind the driver. At Cassidy, the vehicle stopped and some passengers boarded. These men who looked ordinary, later turned out to be armed men. Our vehicle proceeded to Pako bus-stop; there the conductor asked for the fare and these men got annoyed. They said they had no money and thundered back at the conductor why he should muster the boldness to ask them to pay. In the melee, the conductor insisted they must pay or disembark.

'As our vehicle proceeded to Pako bus-stop, the conductor demanded the fare again and this time, the driver put in words that the people involved should comply with the conductor and pay. But their insistence on not paying made the driver to threaten to take them back to where they boarded the bus.'

This statement was an opportunity the robbers had waited for. One of them pulled his gun, aimed straight at the back of the driver's head and shot him twice pointblank.

The first bullet hit the driver, while the second caught the head of the unlucky passenger behind him, Mrs. Irabo. She became unconscious immediately and later heard the story of the rest of the incident after she had come round the following day in hospital.

'The bandits shot and killed the driver instantly. Since the bus was in motion, and now without a driver, it criss-crossed the road until it rested at a final point. During the pandemonium, the murderers scampered out of the bus and escaped. Mrs. Irabo, who sat close by, was pushed out of the vehicle with blood dripping from her body from the point the bullet entered her brain region.

She said: 'I became unconscious and fell off my seat. And the bus started swerving because the driver was dead. In this commotion, these guys wanted to jump out of the vehicle. The robbers pushed me out of the vehicle, and jumped down.'

Her daughter managed to get out of the vehicle. The 10-year-old later told the mother: 'Mummy, I don't know how I jumped down from the bus and started shouting and crying that people should help me rescue you from death.'

The brave little girl could not stand to watch her mother being snatched by death. As the girl wailed and pleaded for assistance, there was a sigh of relief when a police patrol vehicle came by. The police van actually stopped, but as sympathizers prevailed on the policemen to assist the hapless woman, they simply ordered the people to take the woman to the hospital themselves, got back into their van and left.

In a typical Lagos behaviour, the sympathizers also left the scene, abandoning the woman and her daugher.

Mrs Irabor said: 'My daughter cried louder now and never stopped begging people to help until a young man of about 20 years decided to intervene. Some other people helped her move me away from the centre of the road. But nobody agreed to take me to the hospital.

They all gathered, looked at me, but nobody wanted to help. It was this boy, Chima, who was going to buy garri for his family that night. When he came close, he asked what happened. They told him it was gunshot incident. He said, 'let's help this woman.' But those around him ignored his remarks. At this time, a police patrol van marked 'Op Messa' drove by. Chima, I think, took a bike and caught up with the patrol team. They reversed and came to observe the situation. They touched me and found out that at least I was still breathing. And the only thing they could say was: 'Ehn! She is still alive, make una help the woman now.' They jumped into their vehicle and drove off without helping me.

'It was then my daughter cried the more because the people who were supposed to really help her had gone. Chima said if the police could do this, he was ready to brave it and help because there was no other hope. He volunteered to take me to the hospital. My daughter, who told me the whole story, gave him the name of the hospital the family uses. That is Kilani Hospital, in Okokmaiko. Chima stopped a bike; the rider came, looked at me, and said he could not help me. The second bike came looked at me and said the blood on me was too much, thinking I may be dead before we get there; but the cry of my daughter and Chima's pleas made the man change his mind.

'He finally agreed to help, but warned that my blood must not touch him. They managed to put me on the bike. In fact, the boy carried me on his legs; my head was on his chest and the blood from the bullet hole soaked his shirt. That way he took me to the hospital.

Fortunately for Mrs. Irabor, the doctor was around when the rescuers arrived. He swung to action immediately. 'Maybe because all my family members are known faces in the hospital, the doctor had no option than to save my life first. They took me to the theatre and operated on me,' she said of her luck.

She spent a week in the hospital, but was unconscious for two days. It was on the third day she knew where she was. 'When I woke up I felt a sharp pain, like one with severe headache. I wanted to raise my left hand but I couldn't. So I wondered, what happened to me. My husband asked me to relax. Later in the evening, they told me what happened. As my husband spoke I recollected what had happened. I remembered I boarded a vehicle on the day of the incident with my daughter. That was all I remembered.

For her saviour, the woman said: 'I later called the boy. When he came to the hospital, he could not believe his eyes. He was so excited. Since then, he comes to see me and monitor my progress. In fact, I just thank God for him. There is no day we don't see. He's always with me.

'My survival is a thing of joy. That I'm alive is a miracle, but it was a very big shock to my people. I did not report to the police because there was no point. I would have done that, but I believe it's of no use. What if I had died on the road when they abandoned me? If the police could behave this way, it shows that all is not well. It shows that security in this country is very poor; the rate of crime is on the increase and that casts a doubt on their slogan that police are the people's friends.'