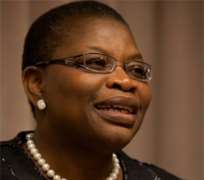 The Presidency has described as insincere and mischievous, the launch by BringBack Our Girls group of a countdown for the Chibok girls to regain freedom, saying fighting terrorism and insurgency is not a football match where commentaries were run for the delight of spectators.

In a statement issued yesterday by the Senior Special Assistant to the President on Public Affairs, Dr. Doyin Okupe, it said President Goodluck Jonathan in his media chat never promised that the girls would be freed within six weeks, noting that the count-down by the former minister and her group was unnecessary.

'Our attention has been drawn to a statement credited to former Minister of Education and a leader of the Bring Back our Girls Group, Dr Oby Ezekwesili, to the effect that President Goodluck Jonathan has made an affirmative statement that the girls abducted by Boko Haram terrorists in Government Secondary School, Chibok, Borno State would be freed within six weeks, hence the beginning of a count-down by the organisation.

'We wish to state that the statement by the President during his last media chat was that the combined efforts of new offensive by the Nigerian military and its allies as well as improved capacity in the operations have made the chances for the rescue of the Chibok girls brighter than ever before.

'This statement cannot be construed as putting a six-week time-frame for the delicate task of freeing the girls alive which the President remains very committed to and would definitely wish that would even happen in a day.

'It is, therefore, insincere and mischievous on the part of Dr Ezekwesili and her organization to launch a countdown which from all intent and purpose is meant to score cheap political points rather than encourage the military and help the cause of the girls and their depressed parents.

'President Jonathan's commitment to the rescue and safe return of the Chibok girls is unwavering. The Nigerian military and its allies have as part of their mandate, the rescue of the girls and all others who are in custody of the Boko Haram terrorists as well as securing the safety of Nigerians living in areas ravaged by insurgency.

'No responsible organization would seek to make a gain of this unfortunate incident and constantly twist facts and pronouncements in order to appear as if government is incapable of meeting its timelines.

'Fighting terrorism and insurgency is not a football match where commentaries are run for the delight of spectators. It is a much more serious exercise and we expect Dr Ezekwesili to understand this in view of her global exposure and stop being a pawn in the chess board of some desperate political actors,' Okupe said.