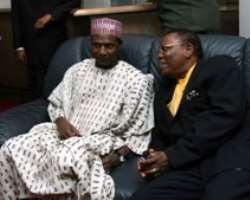 The last is yet to be heard about the case hovering over the head of National Coordinator of the Police Equipment Foundation (PEF), Chief Kenny Martins, his deputy, Ibrahim Dumuje, and two others standing trial over alleged diversion and

conversion of fund, even as the Economic and Financial Crimes Commission had arraigned Martins, his deputy, Ibrahim at an High Court of the Federal Capital Territory, Abuja, sitting at Gwagwalada, and presided over by Honorable Justice Mwada Balami on Friday, December 11, 2009, and accordingly issued a bench warrant for the arrest of the following persons: KENNY MARTINS, IBRAHIM DUMUJE, JONI ICHEKA and COSMOS OKPARA.This was contained in a press release made available to huhuonline.com on Friday (Dec. 11) and signed by Oghenovo O Otemu, Esq. and Ugochuckwu Ezekiel, Esq. (both from Festus Keyamo Chambers) with attached scanned copies of the four warrants of arrest and the Court order. This was sequel to a charge filed by Mr. Festus Keyamo who got a special fiat (authorization) of the Hon. Attorney-General of the Federation, Mr. Michael Aondoakaa, to prosecute the accused persons. It will be recalled that some weeks ago, a Magistrates Court sitting in Abuja discharged the accused persons for lack of diligence by the Police in prosecuting them. But the court did not acquit them. As a result, the Attorney-General of the Federation, instructed Mr. Keyamo to take up the matter. Consequently, Mr. Keyamo filed the following charges at the High Court:

''COUNT 1,That you Kenny Martins, Ibrahim Dumuje, Joni Icheka 'm', and Cosmas OKpara 'm' on or about the 31st day of March, 2006 at Corporate Affairs Commission Wuse Zone 5, Abuja within the jurisdiction of the High Court of the Federal Capital Territory, did conspire amongst yourselves to commit a felony to wit: forge documents relating to Corporate Affairs Commission in a bid to fraudulently change the members of the Board of Directors of NIGERSTALG LIMITED, original partner with the Federal Government on the Police Equipment Fund, and thereby committed an offence punishable under Section 97(1) of the Penal Code, Cap 532 Laws of the Federation Nigerian 1990 (Abuja).

''COUNT 2, That you Kenny Martins, Ibrahim Dumuje, Joni Icheka 'm', and Cosmas Okpara 'm' on or about the 31st day of March 2006 at same place within the Abuja Judicial Division did forge form CAC.7 of NIGERSTALG LIMITED with intent to defraud the Police Equipment Fund and thereby committed an offence punishable under section 364 of Penal Code Act Cap 532 Laws of the Federation of Nigeria, 1990 (Abuja)”.The press release further reads: ''following their failure to appear after having been served the Summons, counsel to the accused persons raised objection as to the jurisdiction of the Honorable Court. Mr. Keyamo, however, insisted that the law at present is that the accused persons must be physically present in court before any objection could be taken based on the most recent decision of the Court of Appeal in the case of Anthony Alintah & 2 Ors v. F.R.N (unreported Appeal No. CA/L/194/2004) and Section 187 of the CPC. The court upheld this argument and issued a bench warrant for the arrest of the accused persons. The matter has been adjourned to 13th January, 2010, for the prosecution to produce the accused persons and for arraignment.''