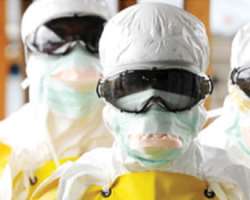 The United Nations said on Saturday Liberia was dealing with just five remaining cases of Ebola, in the clearest sign yet that the country is nearing the end of the outbreak.

The worst outbreak of the virus in history has seen the west African nation and its neighbours Guinea and Sierra Leone register almost 9,000 deaths in a year, although experts believe the real toll could be far higher.

The UN, whose health wing the World Health Organization (WHO) collates Ebola figures, said in a statement that the number of confirmed cases now stood at five and had even dropped as low as one earlier this week.

'According to the WHO, the five cases are laboratory confirmed cases,' Lisa White, a spokeswoman for the UN Mission for Ebola Emergency Response, said.

She added that government figures for Tuesday had shown 21 suspected and probable cases — but only one lab-confirmed case.

'WHO is supporting the government of Liberia in getting down to zero cases,' she said.

'Now is the time to stay vigilant and make sure the good trend continues.'

Assistant health minister Tolbert Nyensuwah confirmed the figure, adding that three of the cases were in the capital Monrovia, while the others were in the northwestern counties of Bomi and Grand Cape Mount.

'It means that we are going down to zero if everything goes well, if other people don't get sick in other places.' Agency report