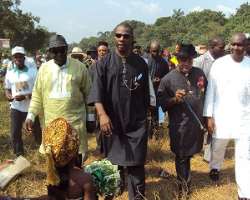 5th December, 2009 will forever remain indelible and memorable in the records of the Angulama Community in Asari-Toru Local Government Area of Rivers State. The day witnessed an unprecedented influx of visitors in a never before seen turn out in the usually sedate town, all in honour of Barrister Osima Ginah, Commissioner for Urban Development in the Rivers State Exco. Arriving at the event by helicopter was the representative of the Governor and the Secretary to the Rivers State Government, Barrister Magnus Abe in the company of the Leader of Rivers State AC and Organized opposition, Prince Tonye Princewill.

The SSG delivering the Governor's speech at the occasion decried the state of under development in the area. In response to the plea from the Community with regard to government's seeming neglect and the lack of basic amenities as well as the absence of a bridge or road to link the community to other parts of the State, he stated thus “As part of its tenure strategy, this Government sees the whole of Rivers state as one big family in need of urgent attention. The onus is on us as a responsible government to ensure the provision of basic infrastructure in every community in the state irrespective of whether they have representation on the State Cabinet”. The SSG further stated to the delight of the crowd, that the demand for a jetty and Bridge by the Angulama Community will be formally presented to the State Executive Council for its prompt attention and action. He went on to commend Barrister Osima Ginah on the honour and recognition being bestowed upon him by the community and urged him to continue eschewing the standard of service that earned him this recognition and also acknowledged the community for providing such an illustrious son for service. The SSG used the opportunity of the event to admonish Government appointees who fail to keep ties to their roots since unbeknownst to them they would have to give account of their stewardship to their people at some point.

Earlier on, Chief Hon. Ngoye Igobo, Chairman of the Organising Committee of the occasion, who is also a trail blazer from the town being the first and only elected member of the State House of Assembly from the town till date in a welcome address he presented on behalf of the community, stated that the event would be remembered for a long time to come. He used the opportunity of the gathering to commend the governor for appointing Barrister Ginah- the first Asari-Toru indigene outside of Buguma, Abonemma and Bakana- into his cabinet. Chief Igobo went on to present a manifesto of woes that the community had suffered stemming from the exploitation and destruction of its waterways by SPDC since its 1971 excavation of the waterfront for their Soku-Alakiri oil pipeline which has since silted up and blocked the canal, the access into the community. On behalf of the community, he sought government's assistance for the construction of a Landing Jetty with raised Causeway as succour to a painful plight. He also called for the provision of basic amenities for the community.

Chief Hon. Andrew Uchendu, Chairman of the South - South Caucus of the National Assembly and the Representative, Ikwerre/Emuoha Federal Constituency as Chairman who chaired the event, in his address remarked, “I commend and congratulate the Kalabari Kingdom for honouring her worthy son in person of Barrister Ginah who has proved himself as an emerging Leader, focused and opinionated who has discharged his duties as a commissioner diligently and professionally. Angulama Community like every community in Rivers State has its own peculiarities but I wish to assure them that most of the problems facing the community will be tabled before the relevant authorities both in the State and National level”.

Pastor Segun Owolabi of the Rhythm FM fame who read the citation on Barr Osima Ginah before the presentation of Awards and gifts by the Community, AC Women, KNC old Boys Association, Rivers State Exco and other interest Groups described Barr Ginah in these words, “Ginah is a study in sheer determination and doggedness and one of Nigeria's new generation of technocrats that have brought skills, seriousness, and integrity to public office, while carrying out a very difficult and controversial reform programme without being found wanting. Indeed, one must salute his courage as a simple Gentleman, a man whose life has become a study in what God can do to lift a man from grass to grace”.

Other special Guests that attended the epochal event include the Rivers State AC and FOOPP Leader, Prince Tonye Princewill who remarked, “..Barr Ginah is a fine gentleman whose love for the emancipation of our people in Rivers State knows no bound. He is a worthy representation of the opposition in cabinet... I must confess that he is an experiment well worth it by the results of the successes he records today”. Others were members of the Rivers State Executive, Dr Sampson Parker of Ministry of Health, Mr Joe Philip Poroma of Social Welfare & Rehabilitation, Barrister Manuela George-Izunwa of Women Affairs Ministry, Barrister E. Ezekiel-Amadi of Lands and Survey among others that included the regent and high Chiefs of the Kalabari Kingdom, politicians and commercial giants.

Barr Osima Ginah who was the cynosure of all the guests in his vote of thanks expressed shock that he could be the centre of such a great event like this. “I lack adequate words to express my profound appreciation and gratitude to all those that found time to attend this event not minding the difficulties and unpleasant terrain to get to my community. I am convinced that collectively with the type of spirit I have witnessed today by both my colleagues in the Cabinet and other Leaders in the State that we can build the Rivers State of our dream. To His Excellency, Gov. Rotimi Chibuike Amaechi, SSG Magnus Abe and Prince Tonye Princewill, It is only God that will reward you all for making this event to be possible. The State and all our people can be rest assured that I will always give my best in the development and emancipation of our people”.

Highlights of the event included the launching of N1B Angulama Appeal Fund, exhibition by various cultural Groups from the area and church service to round up the event.