The Future Project, Genevieve Nnaji, others join ONE to launch Action/2015 campaign in Nigeria 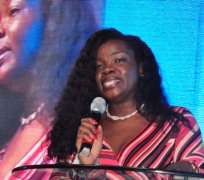 The Future Project (TFP) led other non-governmental organisations in Nigeria on Thursday, 15 January to launch the Action/2015 initiative in Abuja, Nigeria as hosted by ONE.

The year 2015 is significant as the year when the Millennium Development Goals (MDGs) will expire. It also marks the beginning of new Sustainable Development Goals (SDGs) aimed at bettering the lives of people all over the world will commence. This has great and implications for national governments across the globe.

The Future Project, with a mandate to build a network of empowered citizens, joined Save the Children, ONE and a coalition of other committed organisations to host the Action/2015 initiative. The campaign is a growing citizen's movement of hundreds of organizations around the world coming together to demand truly ambitious agreements on climate change, poverty, inequality and injustice in 2015.

“Instead of throwing our hands in the air and giving up because it is 2015 and we see how much work we still have to do to achieve the MDG's, we choose instead to build on what has worked and learn from what has not in order to create the future we want,” said Mfon Ekpo, who is Executive Director of TFP. “It is with this backdrop that The Future Project is proud to be part of the conversation to drive the issue of sustainable development beyond 2015.”

In attendance at the event were Coordinating Minister for the Economy and the Minister of Finance, Dr Ngozi Okonjo-Iweala, ace coach Samson Siasia, One Campaign ambassador and actress Genevieve Nnaji, musicians Nikki Laoye and Timi Dakolo amongst others.

“We need to take action while drawing lessons from the past MDG program as no one can access progress if your starting point is unclear,” Nnaji said,

The highlight of the launch was the delegation of 15-year-old Nigerian children born at the establishment of the MDG's, passionate about accelerating the economic transformation in Nigeria fighting poverty, ignorance, climate change and injustice. They presented to Dr. Okonjo-Iweala with their requests for the NIgeria they want to see in 15 years.

About The Future Project
The Future Project has a simple mandate - to build empowered citizens across Africa, through (inclusive) enterprise and (active) citizenship. This focus on Human Capital Development is informed by our value proposition: Africa's growth needs a generation of young people who are gainfully employed and able to demand better leadership. NOI LISTENING TO ON OF THE STUDENTS