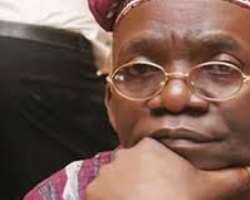 Human rights lawyer, Mr. Femi Falana (SAN), has issued a seven-day ultimatum to the Minister of Finance, Dr. Ngozi Okonjo-Iweala, to supply him with information on the $1bn loan approved by the National Assembly for the purchase of military hardware to prosecute the war against terrorism.

Falana made the request in a letter dated January 9, 2015 on the strength of the provisions of the Freedom of Information Act.

In his letter titled, 'Request For Information on US$1billion Loan For Weapons', and dated January 9, 2015, Falana gave Okonjo-Iweala, who is also the Coordinating Minister on the Economy, seven days to supply the information.

He threatened to sue the minister if she failed to release the information within the seven days ultimatum.

'As this request is made pursuant to the provisions of the Freedom of Information Act, 2011 you are required to provide us with the requested information within seven days of the receipt of this letter.

'If you fail or refuse to accede to our request we shall be compelled to apply to the Federal High Court for issuance mandamus in the circumstance.'

'As you are no doubt aware, a total of 70 soldiers have since been convicted and sentenced to death by the General Court Martial sitting in Abuja for the offence of mutiny arising from the legitimate demand made by the convicts for adequate weapons to confront the well-equipped and well motivated troops of the dreaded Boko Haram sect.

'From the information at our disposal the military authorities have concluded arrangements to put hundreds of other soldiers on trial for making a similar demand.

'Having confirmed that the members of the armed forces are still hampered in fighting the insurgents due to lack of equipment we hereby request you to confirm whether the Federal Government has acquired the military hardware from the loan of US$ 1 billion approved by the National Assembly. If the answer is in the affirmative kindly furnish us with the details of the newly acquired equipment.Falana recalled that President Goodluck Jonathan was compelled to ask for the loan having established that the military was being confronted with insufficient weapons.

'Upon establishing that the armed forces lacked the weapons to fight the rag tag army of the Boko Haram sect President Goodluck Jonathan was recently compelled to seek the approval of the National Assembly for a loan of US$1bn to purchase military hardware to prosecute the war on terror.

'The approval was unanimously granted by the members of the National Assembly in line with the provision of section 217 of the Constitution which stipulates that the armed forces shall be adequately equipped by the Federal Government,”  he said.