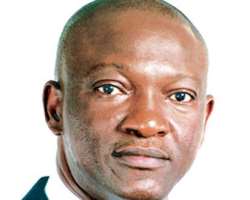 PDP governorship candidate for Lagos State, Jimi Agbaje, has promised to develop 'an ocean economy' to enhance the economic well-being of the people living in riverine areas of the state.

Agbaje, who was speaking at an interactive session with editors and heads of various media houses in Lagos on Saturday, said if elected into office, he would ensure that adequate facilities were provided to enhance fishing and maritime business in such areas.

He said the state had the potential to reap from the vast ocean and maritime resources it has but for lack of adequate planning and attention to the area by government.

Agbaje said a PDP government in the state would focus on the provision of healthcare, security and education for the citizens.

He lamented the present situation where government was spending 56 per cent of the education's budget on recurrent expenditure and promised better facilities and learning environment in public schools.

The PDP candidate also promised to introduce a health insurance scheme to cover all citizens in addition to providing adequate health facilities in the state.

Agbaje also decried what he called multiple taxation being imposed on market women and other businesses in the state and promised to redress the situation if voted into office.

He said five per cent of the budget of all ministries would be devoted to youth programmes to ensure a brighter future for youths through education and skills acquisition.

He pledged that a PDP government would provide 150, 000 houses over a period of four years to address dearth of housing in the state.

Agbaje said in spite of improvement in internally-generated revenue and in other economic sectors the state was still being saddled with about N450 billion debt .

He also said studies by the World bank and other similar organisations had shown that Lagos State still lagged behind other world cities in business competitiveness and investment.

He promised not to allow his administration to be controlled by 'vested interest', adding that all government programmes and policies would be conducted in an open and transparent way. Vanguard