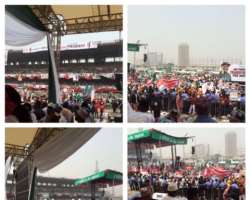 At Tafawa Balewa Square on Thursday 8th 2015, the Double Wahala fame was in best form when he stormed the stage in the middle of the campaign that has lots of politicians and dignitaries across the country.

The Musical Taliban was introduced with Double Wahala. Crowd turned the song to national anthem as they were carried way from the primary campaign singing Double Wahala For Deady Body.

What amazed audience was the President Goodluck Janathan singing the song, Double Wahala back to back while Oritsefemi was performing on stage.

Toward the end of Oritsefemi performance, the Delta State born singer released an official song for Jonathan, titled 'Great Janathan'.

This turned the President On. He was on his feet dancing to the tune of the Mercies of the Lord crooner.

The crowd was requesting for more but the time was limited.

GEJ comments that artiste was a great singer for those wonderful performances.

'Oritsefemi was a great artiste. I love that tune. Double Wahala for their body'.

Any moment form now, Great Politician will be released in to the public.