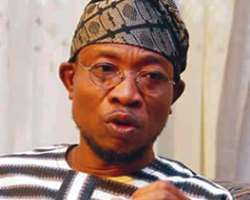 The Osun State Governor, Mr. Rauf Aregbesola, has said that President Goodluck Jonathan’s administration should be blamed for the crude oil theft in the Niger Delta region.

The governor, according to a statement in Osogbo on Monday by his media aide, Mr. Semiu Okanlawon, spoke at the public presentation of a book authored by Mr. Amitolu Shitu, to mark his 50th birthday.

He said that the nation had continued to lose huge resources to oil theft despite the fact that the Federal Government was in control of the Nigerian Army, the Navy, the Air Force and other security agencies.

Apart from the government being in control of the security agencies, the governor said that the present administration, headed by Jonathan, also awarded contract of securing the nation's pipelines to an individual.

But despite these arrangements, he said the nation had continued to lose its resources to some few persons.

Aregbesola said that the only way Nigerians could bring an end to this corruption and others, allegedly being perpetrated by the Peoples Democratic Party-led government, was to vote out Jonathan and other PDP candidates in the 2015 elections.

'Wherever you find the PDP, you will find misery, poverty and under-development. We must remember that the encounter of our people and experience, especially in the South-West geo-political zone, have never brought anything positive. From time immemorial, our people had associated their party with misfortune. And till today, they remain the same. 'The PDP-led Federal Government   has foisted double tragedy on the people through lack of transparency in oil revenues. Even before the price of crude oil crashed in the international market, the PDP-led Federal Government had robbed Nigerians of the oil fortunes through fraud of unimaginable proportions.

'The Federal Government is the authority in charge of the Navy, the Army, the Police, Air Force and other security agencies, yet, they tell us that 400,000 barrels of crude are stolen. Who is stealing the crude oil? And these are despite a questionable contract for the protection of oil pipelines and waterways awarded to an individual. They have no other excuse to give. The only way is to vote them out,' he said.

The governor stated that the Federal Government was doing nothing to stop those stealing the nation's resources, claiming that the nation could be saved of this loss if the leadership was willing to fight oil thieves.

He claimed that the same Federal Government, which had robbed the country of the oil revenues, had made it extremely difficult for the development of the non-oil sector. He said the social, political and economic disorders being witnessed were direct results of the 'visionlessness PDP government.'

Aregbesola reminded Nigerians of the roles played by the likes of Amitolu Shittu and others who were jailed, forced to exile, killed and harassed unjustly for the enthronement of a people's government.

'This is the time for all of you to reconvene and ensure that we rescue our country before it is too late,' he added.

Shittu, in his speech also urged Nigerians to rise up and vote against bad governance while rallying support for the APC presidential candidate, Gen. Muhammadu Buhari (retd.).