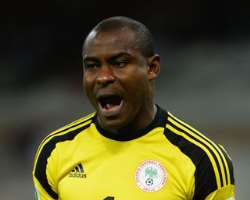 Super Eagles captain, Vincent Enyeama has expressed excitement after he made the final shortlist for the 2014 CAF Afri can player of the year.

The Lille of France goal keeper has been named along side Pierre Emerick-Aubamey ang of Borussia Dortmund and Gabon, and current holder, Yaya Toure of Manchester City and Ivory Coast.

And the 32-year old has told SL10.ng of his delight at making the final shortlist of the prestigious award.

'I feel so proud and hon oured to have been nominated for this award. To be the best in Africa is not easy and I am excited that I have been short listed,' he told SL10.ng.

Enyeama was voted for by coaches of the national teams affiliated to CAF for the award ceremony which will hold in January in Lagos and the 2013 Africa Cup of Nations win ner has once again expressed gratitude to all those who voted for him.

'I have to say a very big thank you to all those who voted for me, it's a big honour for me, my family and my country.'

The former Heartland goalkeeper has been in inspired form for both club and country in this calendar year and has been instrumental in their rela tive success.

The only dent however, is his failure to qualify with Nige ria for the 2015 Africa Cup of Nations. The Sun