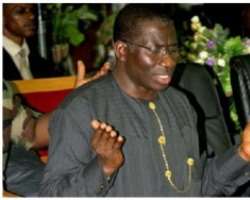 President Goodluck Jonathan has asked all Nigerians to pray for a greater manifestation of divine peace and the vanquishing of all demons of hatred, divisiveness and disunity in our midst.

Jonathan in the Christmas message on Wednesday said that the Christmas season had remained a time that all Christians and non-Christians alike should reflect more deeply on the virtues and ideals which the Messiah, Jesus Christ, espoused during his earthly mission.

'To my mind, there can be no doubt that the greater internalisation of the virtues of love for our fellowmen, tolerance, Godliness, honesty, fairness to others, selflessness, and peaceful co-existence with others, by all adult Nigerians, and the inculcation of the same in our youth, will definitely help our dear nation to overcome most of its present challenges.

'Peace and love for others, especially, were a constant refrain in the Messiah's teachings and admonitions to mankind.

'Therefore, as we celebrate his birth, I urge all Nigerians to offer special prayers for a greater manifestation of divine peace in our country and the vanquishing of all demons of hatred, divisiveness and disunity in our midst,' President Jonathan said in the 19-paragraph christmas message.

He further urged all Nigerians to remember and offer special prayers for all women and children who have suffered and continue to suffer untold hardship, deprivation and death at the hands of terrorists and insurgents.

The President further called for prayers for Nigeria's gallant soldiers and security agents who remained at the forefront of the national effort to overcome terrorism and violent extremism, even as the rest of the nation celebrates Christmas and the coming New Year.

'In this season of goodwill, I urge all patriotic Nigerians to rededicate themselves to doing all within their powers to support the brave men and women of our armed forces in the ongoing war against terrorism, and also support the Federal Government's efforts to provide more succour to the hapless victims of terrorist atrocities.'

He also said that the Victims' Support Fund, which had been established to raise additional funds to assist Nigerians who have been adversely affected by continuing insecurity in some parts of Nigeria, remained active.

President Jonathan urged all individuals and corporate organisations, who have not yet done so, to donate more generously to the Fund which had been efficaciously deployed to ease the sufferings of victims of terrorist violence.

The President also said the Independent National Electoral Commission (INEC) would be given the necessary assistance to conduct free, fair and credible elections.

To ensure peace before, during and after the elections, the President called on all politicians to ensure that they conduct issue-based campaigns ahead of the elections.

He said, 'We are also celebrating this Christmas against the background of preparations for next year's general elections.

'I seize this opportunity to reassure the nation that my administration will give the Independent National Electoral Commission all necessary support to ensure that it delivers very free, fair, credible and acceptable elections in 2015.

'National security agencies will also be given all necessary support to enhance their ability to ensure that the elections which should strengthen democracy in our country are peaceful and violence free.

'I urge our political class to be law- abiding and place the greater interests of our nation above all personal or sectional interests in the countdown to the elections.

'Let us all be more statesman-like, conduct issues-based campaigns, and eschew the promotion of falsehood, division and hatred of others as we seek the votes of our countrymen in what should be a peaceful competition among contending points of view for the progress and development of our dear nation.'