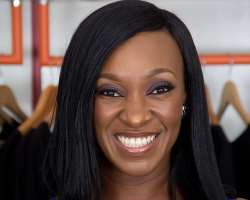 On-air-personality-cum-actress, Funlola Aofiyebi-Raimi, has revealed that the best part of her life has been being a mother.

The actress took to her social media page to appreciate her baby, who she says has given her sleepless nights, stretch marks and headaches.

She posted thus, “Even though YOU have given me sleepless nights, stretch marks, headaches, plenty to do and little time for myself...Nothing compares to YOU! Thanks for choosing me as your Mummy #Family Means Everything.”

Funlola Aofiyebi-Raimi, born Abibat Oluwafunmilola Aofiyebi and known informally as FAR, is the last of seven children born to a businesswoman mother and an entrepreneur father. The name FAR came after she got married and has become her signature.

She had an early start on stage and television with her aunt, Teni Aofiyebi, a renowned Theatre Artist, who has also become a doting mother to her son. She is married to advertising guru, Olayinka Raimi.