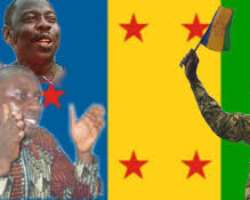 In a congratulatory message, MOSOP President and Spokesman, Dr. Goodluck Diigbo said the governors and other elected should not engage in corrupt practices.

Diigbo explained that the elections represent a further irreversible step forward for the enforcement of the United Nations Declaration on the Rights of Indigenous Peoples.

After the formal inauguration of the Ogoni Self-Government, the relationship between Nigeria and the Ogoni people be based agreements and constructive arrangements.

This will be in the recognition that the Ogoni people are a distinct indigenous people within the nation state.

He said it took 18 months to arrange, including the conduct of staggered elections to establish an electoral college. Sir Ibirah commended the Ogoni leader – Dr. Goodluck Diigbo for his dedication, focus and leadership.

He said his Commission saved over N1 million, because some election officials declined monetary compensation.

He said all arrangements have been put in place to elect the first president of the Ogoni Nation and leader of the National Legislative Assembly on Saturday, December 27, 2014.

Monitors and accredited agents that will observe the elections are being accredited, including other ambassadors of other ethnic nationalities in Nigeria.

Details of all elections' results have been displayed at OGECO office in Bori – Capital of the Ogoni Nation.