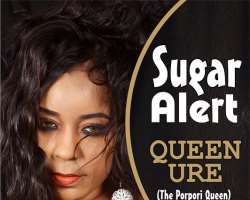 'Sugar Alert' is a song produced by George Nathaniel, the young dude behind some of the tracks in P-Square's album.

The former banker and live coach, since the release of her hit track, 'Popori', has continued to perform at some shows. She has also been well received by music buffs and pundits.

Her new song is highlife with a fusion of pop that expresses the power of money especially in a relationship. The single also passes across a message to men to be able to take their position as the provider of the home.

Queen Ure is the only daughter of late Dr J.O.J Okezie, who was a onetime Minister of Agriculture, Medical Doctor and politician.

According to the singer, video of her new song will be released in early 2015.